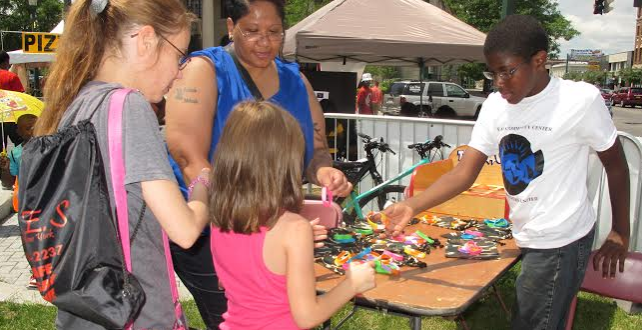 For Lamique Agard and Shawn Newdy, who moved to Syracuse from New York City three weeks ago, Saturday’s Juneteenth Celebration represented what drew them to make the move.

“There’s a feeling of family, of close knit community here,” Newdy said. “That’s what we love about Syracuse.”

A parade kicked off the celebration in Clinton Square. As one of the largest Juneteenth celebrations in the country, the festival normally draws about 8,000 to 10,000 people. This year, the festival’s organizers hoped to bring in three times as many attendees—about 25,000 to 30,000—to celebrate the 150th anniversary.

Agard enjoyed the afternoon’s artists, but was excited upon finding out that Angie Stone would be performing later.

“This is huge for Syracuse, NY to have Angie Stone here,” said Kevin Henry, vice president of the Juneteenth Committee’s board of directors. “We’ve been working on getting a national act for the last four or five years.”

Stone was apart of an effort to make this Juneteenth Celebration one of the biggest yet. This year marks the 150th anniversary of the emancipation of Texas’ slaves, which happened two years after the Emancipation Proclamation. The Juneteenth festival commemorates the history of slavery while celebrating the present.

Agard sipped some lemonade to quench the thirst brought about by the sunny day. “We are New Yorkers at heart. Whether it’s Syracuse or New York City, we have one love: New York State,” Newdy said.