Although school has been let out for the day, the halls still echo with the sounds of students who are walking and conversing with one another. Some, dressed in athletic gear, head off to practice. Others are excitedly ready to head home for some rest after a long and busy day. There is one person, though, despite having graduated years ago, who still walks the halls long after the others have left. 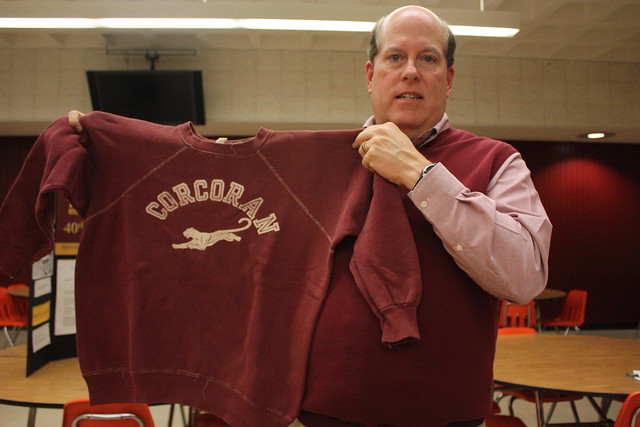 Paul Grace, a former Corcoran alum and historian of the school, holds up an old Corcoran sweater with the cougar mascot that was given to him by a former alumni.

Paul Grace, a 34-year employee of Carrier Corporation working in its International Business division, has dedicated himself to preserving and documenting the long and fruitful history of his alma mater, Corcoran High School, 919 Glenwood Ave. Whether he is collecting clippings or uncovering long lost memorabilia, his appreciation for his former high school is a passion. And with the 50th anniversary of the school’s groundbreaking in January, Grace’s labor of love will show just how precious Corcoran’s history is.

On Jan. 18, 2013, to be exact, Corcoran will celebrate a historic 50th anniversary of the groundbreaking that began the rigorous 24-month building process before the school was finally completed.

“They (JGA Construction Co.) had estimated about a 19-month build cycle,” Grace said.  “That did not happen.” 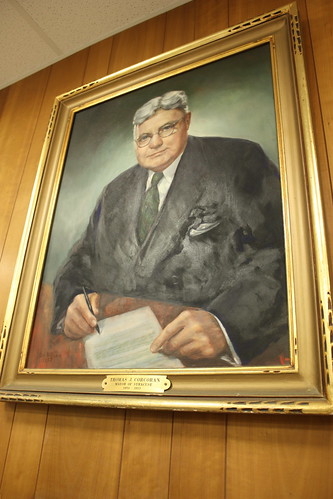 In one of the school offices hangs a painting of former Syracuse Mayor Thomas J. Corcoran who served from 1950-1953, and whom the school was named after.

According to Grace, in the 1950s the school district, along with the state and federal government, realized that the city school district had not gone through a major building process since the 1920s. In addition, World War II produced the “baby

boom,” a steep rise in birth rate spanning from the 1940s until the 1960s. School officials grasped that their current school system wasn’t prepared to handle the influx, and they began to plan for a bigger school.

The current Corcoran principal, Leo Cosgrove, said the anniversary of the groundbreaking is a testament to Corcoran’s impact in the community.

“It’s the recognition that this is a big piece of the community,” Cosgrove said. “We had a gentleman here who hadn’t been back to Syracuse in 20 years who came back just to walk the school.”

Grace mentioned a couple of Corcoran High School sweethearts who are still married and who still come back to “where it all began.”

Those little anecdotes remain, even as the decades have passed.

“I had a tremendous experience here,” Grace said about his time at the school from 1970 until 1973. 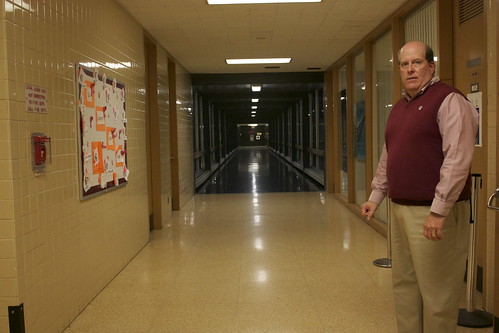 Paul Grace stands at the beginning of one the school’s sky tunnels that was constructed over a pond of water to connect students from one part of the building to another.

Corcoran’s impact on Grace was so strong that he committed his services to the school in several capacities for decades after graduating.

Brian Nolan, former principal of Corcoran High School and now the executive director of High Schools & CTE Programs at the Syracuse City School District, said that events such as the anniversary of this groundbreaking would not be feasible without Grace’s help.

“He got himself involved because he knew not only how important it would be for the school but because of the pride he has in it and the need to continue that on for kids in the future,” Nolan said when describing Grace.

Despite Grace’s full-time job, he still commits hundreds of hours each year, usually on weekends, to head up the alumni association and various other committees, and, most importantly, to collect and uncover old artifacts that help tell Corcoran’s story. He has one document in particular that is quite special, a blown-up newspaper article from 1963 that contains a photograph of the groundbreaking. It is those artifacts, such as documents, photos and memorabilia that chronicle the history inside and outside of Corcoran High School.

“The attachment to the school becomes a long-living memory,” Nolan said. “People had a great experience here and still fondly remember those experiences even so many years later.”

Cosgrove added, “We have great, great kids and the teachers love being here.”

The legacy of Corcoran 50 years from now will be about the halls that helped to spark change, according to both Cosgrove and Grace.

“The most important thing is to have the kids really try to change what’s around them and make the community stronger,” Cosgrove said.

With a smile, Grace added, “If they could return and think ‘How can I give back?’ then that’s all that matters.”

And that is history in the making. 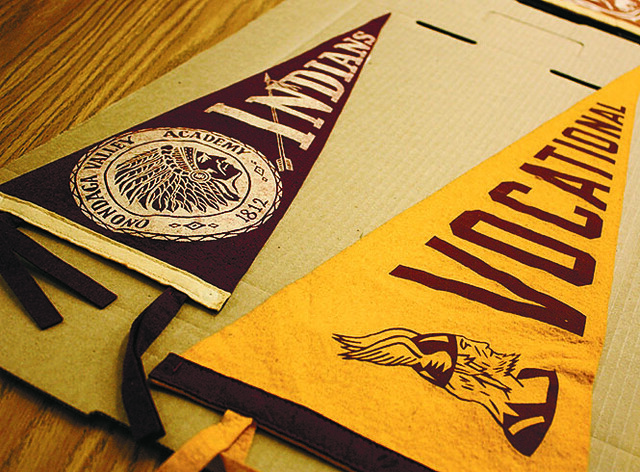 Pictured here are the two former school banners of Onondaga Valley Academy and Vocational High. Both eventually combined to become Corcoran High School in September of 1965. 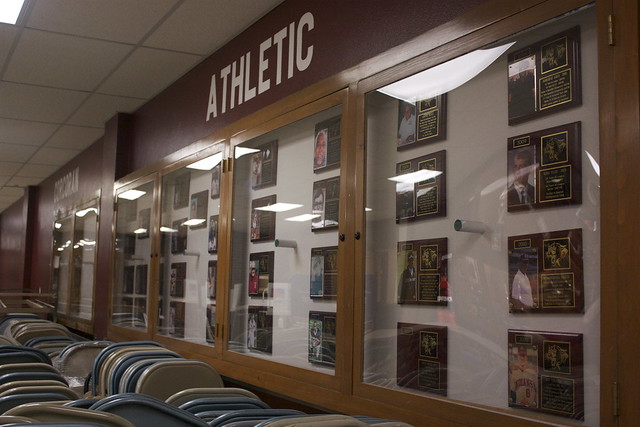 An athletic Hall of Fame wall is just one of the many unique features Corcoran High School houses. It displays a picture of former Corcoran alum Jo-Lunn Dunbar (2003) who went on to play professional football for the New Orleans Saints. 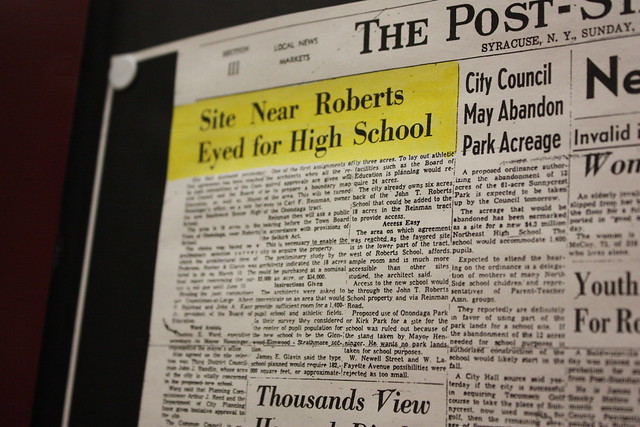 An old newspaper clipping from May 21, 1961 writes about the selection of land that would eventually house the future Corcoran High School. 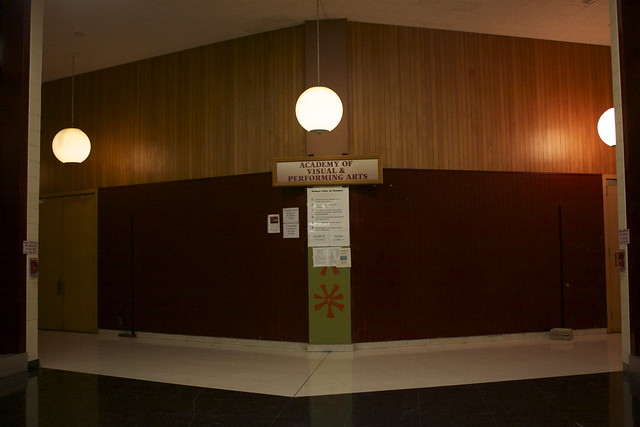 A unique feature of the historical school is the octagonal auditorium, where several school plays and functions are still held today. 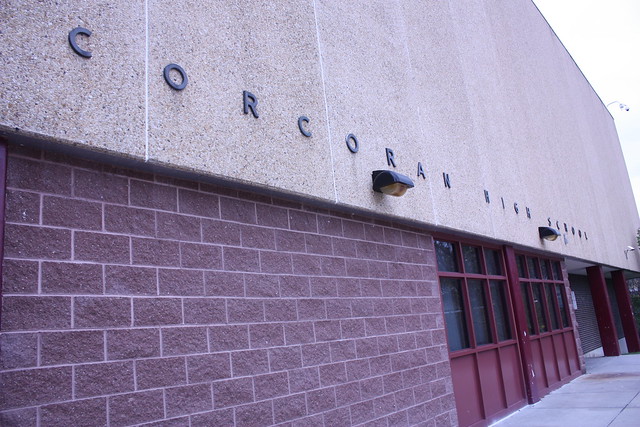 Corcoran High School will celebrate its 50th anniversary of its groundbreaking, which occurred Jan. 18, 1963.