More than 150 neighbors poured into the upstairs auditorium and hallway in celebration of the tree lighting and community service awards honoring local volunteers and groups in the spirit and memory of the volunteers who began the tradition like Charles Dozier III.

First time participants, Thelma Flagg and Leslie Davis-Chandler, whose children convinced them to come out to the event with their grandchildren, were the first parents in line outside once the library closed.  The branch closed at 5 p.m. to prepare for the event at 5:45 p.m. 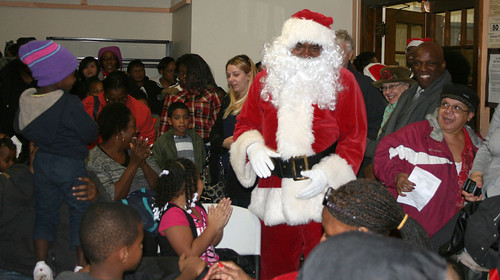 Santa makes his way through the crowd during the 15th Annual South Side Christmas Tree Lighting Ceremony held at the Beauchamp Branch Library in Syracuse. -- Photo by ITC Media

“It feels so good when you come to something and there’s no drama,” replied Davis-Chandler.

Though roads were not blocked until 6 p.m., more than 65 parents and children stood outside until 5:50 p.m. before the doors opened. American Red Cross also arrived to serve hot chocolate and cookies to families before the ceremony started.

“I’m watching all the action come to the library,” said librarian Jeff Paston, as the auditorium filled and groups of families continued to walk across the street into the library.

Paston, who mentions that last year’s ceremony was “light,” was surprised and excited to see the turnout.

“We used to fill the parking lot at Key Bank years before,” Paston said. Yet the turnout continued to grow as guests and past and present awardees continued to file in.

Host Dr. Rick Wright exclaimed how important volunteers are to the ceremony such as Joan Hillsman, the tree lighting committee, students and neighbors.

Paston agreed that there was a lot of community at the branch and that it was especially the kind of outreach that Charles Dozier III believed in despite the violence that took the life of Dozier’s mother.

“It’s not just the committee,” said Paston as he reminisced about Dozier’s friends in all races and income levels — similar to the gathering for the tree lighting.

Among dozens of children, neighbors and volunteers were awarded: 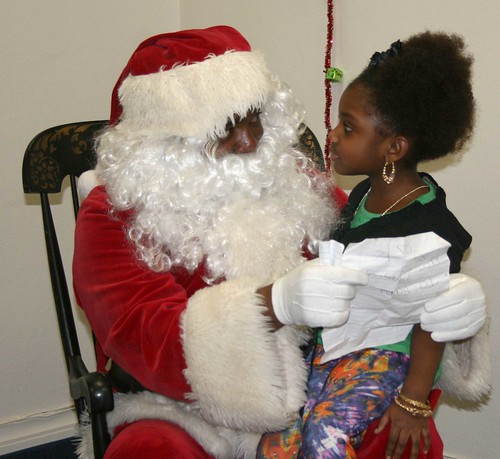 Four-year-old Zyazia Hill reviews her Christmas list with Santa at the 15th Annual South Side Christmas Tree Lighting Ceremony at the Beauchamp Library in Syracuse. -- Photo by ITC Media

Rowser, who coordinated the program for 14 years says she will stay on hand to advise and continue to assist.

“It’s a lot of work to get everyone together,” Grace said.

Other committee members shared praise for of the Beauchamp Library staff as they assisted in cleanup after the distribution of gifts and for helping to coordinate families and their children to Santa for interaction, gifts and to receive hats and gloves.

Deemani, 9, from Porter Elementary said he asked Santa for a PS-3, games and an iPod because he “always does good in school, helps his mom with chores and helps his baby brothers.”

Santa volunteer, Hollis Mathis, who works for the City of Syracuse, says for him the best part of volunteering is seeing the children’s faces.

“It’s really about bringing the kids together to show them they can travel to any part of town they want to,” reiterated Leslie Davis-Chandler.

As librarians and committee members — friends of the late Charles Dozier III, cleaned up around 7 p.m., they agreed that they were happy to have a large turnout and to recognize the participation of sponsors and community members.

When asked about preparations for the ceremony next year as it will be handled by a community group, according to the announcement, librarian Katie Hayduke assured that Beauchamp will continue to participate closely with the program.

“We’re not going anywhere,” she said with a smile. 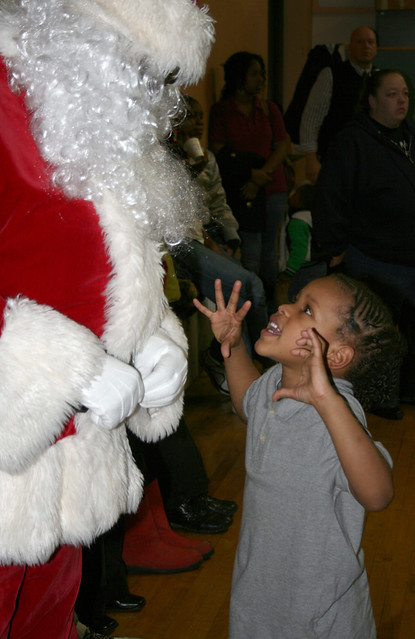 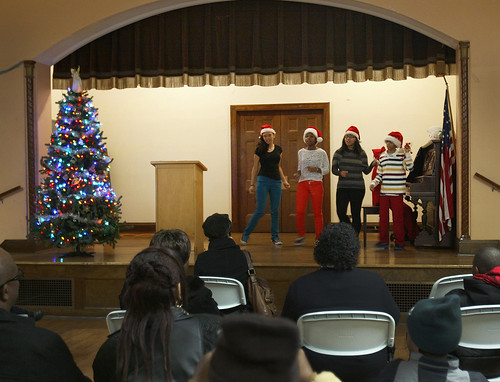 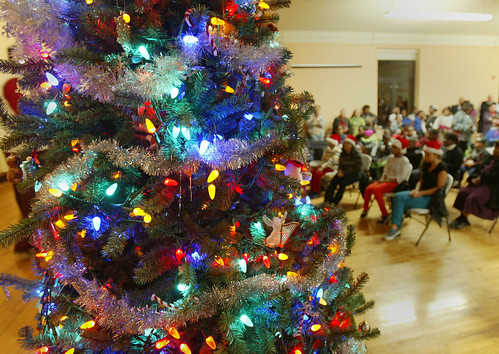