On the Right Track

Sharon Owens upholds her commitment to helping those in need

Thirty years ago, Sharon Owens got off the “wrong track” and onto the right one — and she has continued helping others do the same in one form or another ever since.

As she nears her half-year anniversary as CEO of the Southwest Community Center and the Syracuse Model Neighborhood Facility, Inc., she cites a number of accomplishments, ever mindful of how it started three decades ago.

Indeed, until summer 1983 (going into her junior year of college), her goal was to work as a businesswoman on Wall Street. A graduate of Geneva High School, she enrolled at Syracuse University in 1981 as an economics major. 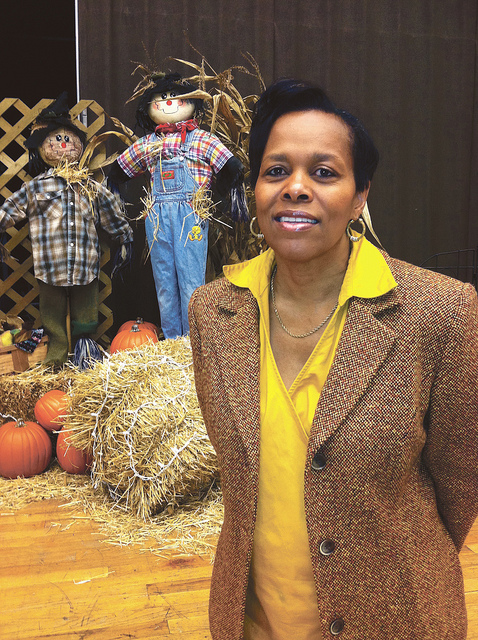 During summer 1983, though, the Dunbar Association — a group that specializes in helping people connect with homeless shelters, food pantries, financial assistance and battered women’s services — was looking for interns through the SU athletics program. At the time, Owens was a track-and-field superstar (later to be inducted into the Orange Plus Hall of Fame in 1986); she interviewed for the position.

“That internship with Dunbar changed my life,” Owens says. “It was then that I realized I had been majoring in the wrong thing for the past three years. Through the program, I worked with so many kids, most of them living in the ‘bricks’ down the Hill from SU. I found then that I was meant to help people.”

Owens was offered a full-time position with Dunbar when she graduated from SU in 1985. She worked
there for four years, and was then hired by the Southwest Community Center to work with teens in the PEACE program, which is dedicated to helping people become self-sufficient.

Over time, she has led the Head Start Program (children ages 3-5); the Early Head Start Program (preschoolers, ages 1-3); the Infant Mortality Rate Prevention Program (working with mothers to get their newborns to see age 1); and the Home HeadQuarters Program (helping adults improve their living situations).

“Because I have worked with parents and children at so many different ages throughout the different programs, I now run into families I’ve worked with who are showing me their kids’ graduation photos, thanking me for helping them make such important life decisions,” Owens said. “It makes me proud to know that I helped get them to where they are now.”

Owens had been working as deputy commissioner for the city’s Department of Neighborhood and Business Development for three years when the CEO position for the Southwest Community Center opened up in January of this year.

She succeeded former CEO Jesse Dowdell in May, and has already taken steps to separate adolescent programs from the teenage programs at the center; increase safety for the SCC; change a negative perception of the center with some people; re-establish the adult presence in the building; and rebrand the Syracuse Model Neighborhood Facility Inc. so community members know the company includes a large family planning service located in three different clinics.

“She is just a go-getter,” said Jenny Penningston, administrative assistant to the CEO.

“Whatever visions she has she implements them and works on making them happen,” Penningston said. “She is a very caring person and very approachable. You can talk to her about anything. She welcomes any ideas that you may have and is very open to the staff input.”

Owens spends time with her husband Shaun, and her 23-year-old and 13-year-old sons. She enjoys watching sports with her family, and also singing in her church choir.

“She has been a phenomenal change for us,” said Dr. Jeffrey Jackson, Southwest Community Center director of health services.

“She is definitely a hands-on leader who’s not afraid to do the dirty work. She rolls up her sleeves and dives right in.”