BJ Adigun, administrative director of green technology for the Onondaga County Department of Water Environment Protection, spent 80 minutes speaking and answering questions from two dozen people gathered at Brady Faith Center on South Avenue. He explained why green roofs, porous pavement and rain gardens are important, how they work and where organizations can apply for funding.

“We have the opportunity to lead the way and not only clean Onondaga Lake, but show the rest of the state and the country the benefit of green infrastructure,” Adigun said. 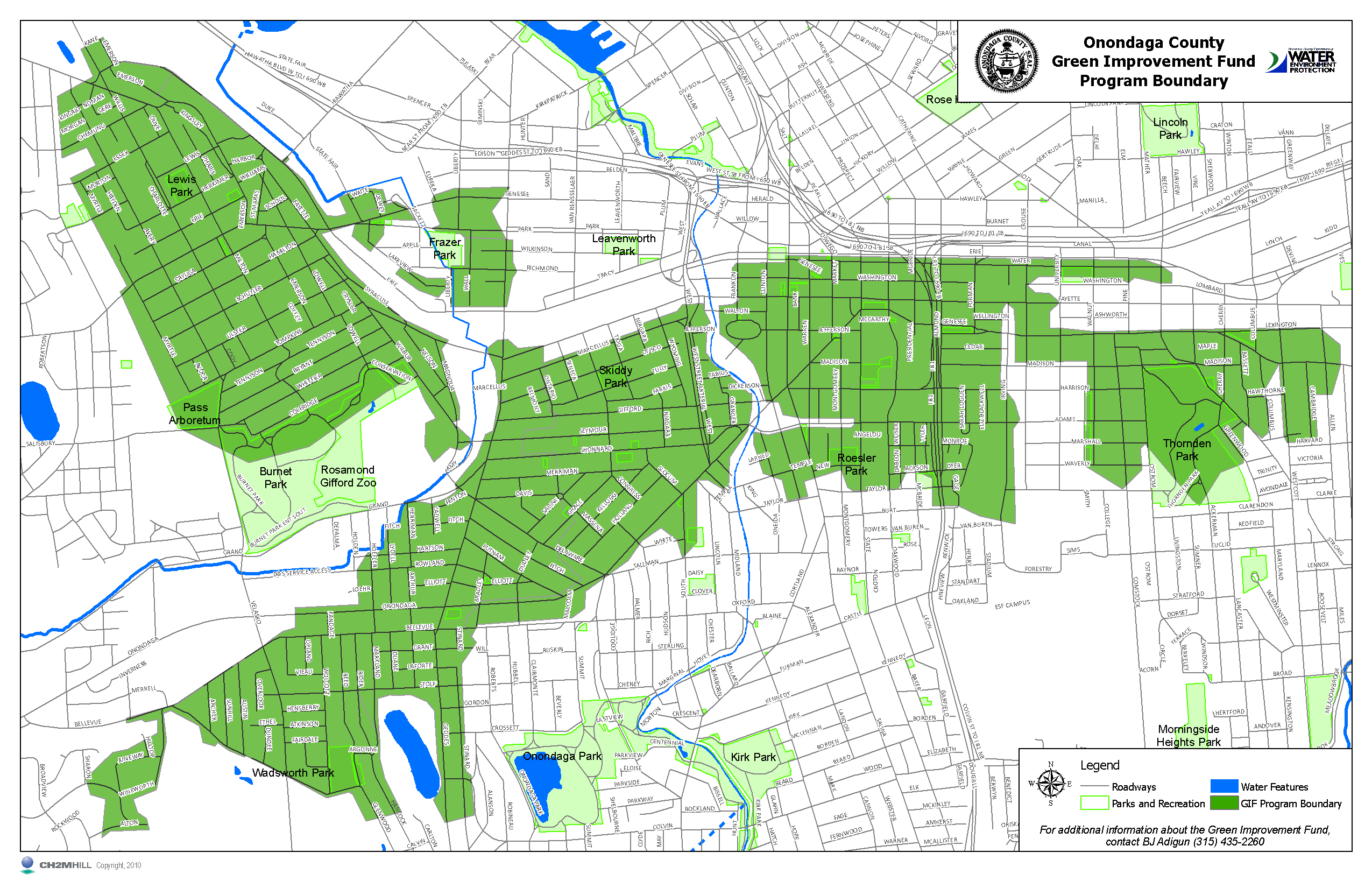 The Green Improvement Fund, part of the county’s Save The Rain initiative, offers funding of up to 100 percent for green infrastructure projects undertaken by private companies and organizations. The maximum grant for a single project is $100,000, and maximum grant to a single applicant is $250,000, said Adigun, who expected to receive an “influx” of applications as soon as details were posted Wednesday on the county Web site. Only projects within the Midland, Harbor Brook and Clinton watersheds will be considered.

“We anticipate we’re going to blow through that $3 million very quickly,” he said, adding that there could be additional funding available if the project is successful.

The meeting was organized by the Partnership for Onondaga Creek, a South Side environmental advocacy group that fought the county over the Midland Avenue sewage treatment plant, built in 2004. Adigun acknowledged that the Midland Avenue plant “wasn’t really the best use of taxpayer dollars,” and was not working as well as envisioned. “Told you so,” an audience member chided.

More recently, the partnership worked with the county to amend the court order specifying steps for cleaning up Onondaga Lake. That change allowed for greater reliance on green infrastructure such as green roofs, rain barrels and porous pavement rather than ‘gray’ infrastructure like sewage treatment facilities.

Adigun showed photographs of green roofs, rain gardens, porous pavement and cisterns that have gone up in Syracuse and around the country. Looking at pictures of sidewalks with vegetation down the center and along the edges, he called it “a little more aesthetically pleasing than just walking down the street and seeing a bunch of asphalt.”

When storm water is collected, either in storage containers or by plants, less of it makes its way to the sewer system. The sewers in Syracuse, like in many cities, mix together sewage from peoples’ homes with storm water. During wet weather the system, much of it over a century old, was designed to overflow and spill out into waterways.

Audience members peppered Adigun with questions about the Green Improvement Fund and how it would be administered. Lee Coker, who owns a paving and driveway sealing business, asked if funding would be available for smaller contractors.

“A lot of the time, in order to get a job, you need to know somebody,” he said. “How are the smaller contractors going to compete without the capital to do this?” Adigun responded that training would be available for contractors, and that projects would range in scope, allowing contractors of all sizes to bid competitively.

Aggie Lane of the Partnership for Onondaga Creek suggested establishing a revolving fund for small businesses. Adigun said he’d pass the message along, but wasn’t sure how far it would go.

“Just to get here, we had to jump through a gazillion hoops,” he said. “You never want to count on the state of New York to do something.”

Adigun predicted that the DEC might eventually order Syracuse to change its building codes and require more green infrastructure.

Thomas Francis, executive director of Syracuse Model Neighborhood Corp., said he was encouraged by the project, but wished there was money set aside for projects on a smaller scale. The minimum grant available is $20,000, Adigun said.

“We are doing residential construction such as sidewalks and driveways, and it doesn’t sound like that’s what they are looking for to fund,” he said. “I think it’s the way to go but it’s not going to help me today.”

Pete Worth, who lives in Fayetteville, said he was most concerned about energy consumption at sewage treatment facilities, and was disappointed that more help was not available for homeowners. “I think a huge boat is being missed,” he said. “If you own your property, there are things we can all do.”

Details about Save The Rain and bidding instructions for the Green Improvement Fund are posted online at www.ongov.net/savetherain.