The Syracuse Poster Project celebrated the completion of an innovative art project: the group offered posters from its archives to businesses and public venues along the South Salina Street business corridor Thursday, Aug. 15. 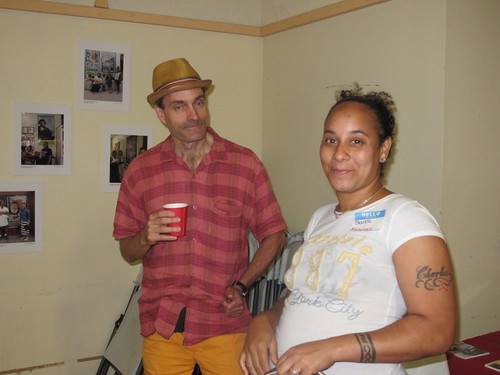 “It’s silly to have these posters in my garage when they can be doing some good somewhere,” said Jim Emmons, project coordinator for Syracuse Poster Project.

The exhibit of poetry and art posters that decorated downtown now is pleasantly displayed from Colvin Street to Brighton Avenue. The Poster Project devised the pilot program as one of several new ideas the group is employing to grow the organization’s reach, mission and business appeal.

“We thought it was innovative for an arts organization to take their art into the community instead of expecting the community to come to them,” said Sheena Solomon, director of Neighborhood Initiatives for the Gifford Foundation. Solomon noted that other arts organizations can learn from such a strategy and said she imagines that Souths Side businesses were probably “shocked to have someone asking them what they want instead of telling them what they need.” 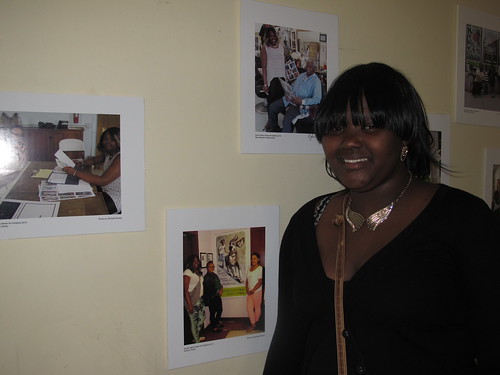 Tania Peterson stands near her exhibit, a collection of photos taken by Michael Moody documenting poster installations in South Side businesses.

To accomplish this, the Poster Project applied for grants from the Gifford Foundation and the New York State Urban Council. They employed two youth workers through On Point for College. The two workers, Tania Peterson and Rachel McMillian, go out into the community and encourage businesses and organizations to display the haiku/art posters for at least a year. They also hired hired Michael Moody, an area artist, to prepare and install the posters.

“We want to venture out into other communities. Now we know how to do it,” said Marissa Saunders who is a new Poster Project board member and one of the organizers credited for adding “flavor” to the group and the South Side pilot project.

“We are looking for more multicultural input. We want to touch people whom we haven’t touched before,” she said.

Jim Emmons agrees that the outreach workers were a part of getting the posters to a community that appreciates them, citing that the collection of haiku and art have grown to reflect more ethnicity and culturally diversity.

“Most people didn’t know about the poster project or what we did,” said Peterson about the time she spent educating residents on the art group. Peterson, who will be attending Morrisville College this fall, says she found the project interesting and is glad that she was able to complete the first pilot on the South Side. 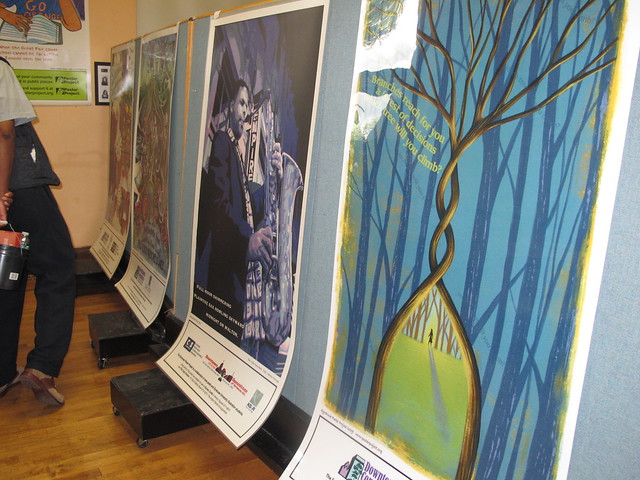 As submissions for the poster project are now reopen, Emmons is seeking to grow the number of submissions as well as opportunities to engage new talent to work with the Poster Project. With a goal of eight to 13 board members, Emmons says that the Poster Project is frequently looking for talented, entrepreneurial-minded individuals who are interested in “trying to make something art-based be sustainable.”

“We couldn’t have done this in the beginning. It took time to gather a collection like this,” Emmons said. “This event is our way of saying thank you.”

Business Recipients of Posters Include: