Finding ways to help women detect breast cancer, then get through it

Valerie Taylor was lying down relaxing in her home when she felt an itch in her right breast. When she touched it, she discovered a lump that felt like the shape of an egg. She called her doctor right away.

“I was more scared than anything because I was like ‘What the heck is this? What is going on?’” she said.

The doctor ordered a mammogram and a sonogram.

“It was an all-day process,” she said of that day in April 2003 — a day that did not end well. It was Stage II breast cancer. 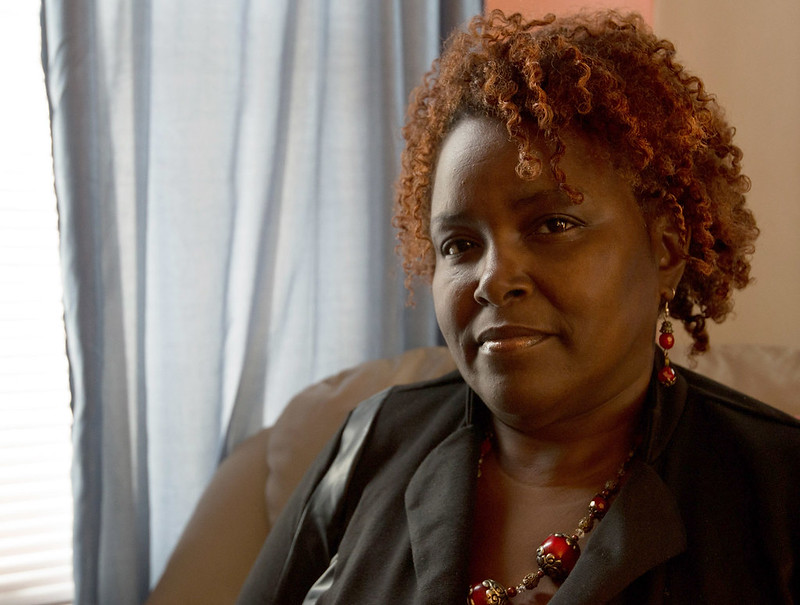 Taylor had gone to her appointment alone. Her sister was supposed to meet her at the hospital, but by the time Taylor had been escorted out the side door, her sister was at the front, oblivious to what Taylor was going through.

Taylor left the hospital alone, heading to her mother’s house.

“My mother and I got in the car and we drove around,” she said, describing how she processed her initial diagnosis. “I just drove and she sat there.”

Although Taylor, 56, had the company of her mother later that day, her solitary trip to her doctor’s office and her experience that day is the kind of thing that inspired SUNY Upstate Medical University to write a grant that is funded by Susan G. Komen Central New York called “She Matters.”

Bill Simmons, director of the Syracuse Housing Authority, a partner in the grant, applauds the preventative efforts of the program.

“Many will go to emergency rooms before their doctor’s appointments or health troubles,” Simmons said. “That model, from a business standpoint, is unsustainable. Upstate thought that it would be a good business model if they had a relationship with the residents of Pioneer Homes, encouraging them to be proactive with their health concerns and health issues as opposed to going to the emergency room.”

In collaboration with the Syracuse Housing Authority, “She Matters” has trained four residents of the Pioneer Homes development to be resident health advocates.

Advocates go door to door in their neighborhood to register women over the age of 40 for mammograms and to educate them about breast cancer.

The initiative’s goal is to reach the 149 black women over the age of 40 in the development. Since the program launched this past summer, about 50 women in the Pioneer Homes development have received mammograms. Nearly 200 women in Onondaga County have been reached through awareness and education, which includes women outside of Pioneer Homes and women under 40, according to Linda Veit, project director of the Upstate Cancer Center.

IMPORTANCE OF MAMMOGRAMS
Martha Chavis-Bonner, one of the resident health advocates who is paid a modest stipend from the grant for her work, said, “Most people that I have gone to have never had [a mammogram] done before, and they didn’t know how important it was for their body.”

White women have higher breast cancer rates than any other race. However, black women under the age of 40 have higher incident rates and have an increased chance of dying from the disease at any age, according to the American Cancer Society’s Cancer Facts and Figures for African-Americans 2013-2014 report.

Cancer is also the second-leading cause of death for black women, according to the Centers for Disease Control and Prevention. Additionally, black women have a 79 percent five-year survival rate compared with white women, who have a 92 percent five-year survival rate, according to the American Cancer Society. Furthermore, black women are 40 percent more likely to die from breast cancer than white women.

Kate Flannery, the director of Komen CNY who approved the grant, said such statistics are unacceptable. She hopes “She Matters” reveals why these differences are so vast.

“Pioneer Homes is half a mile from two hospitals,” she said. “It shouldn’t be location [that’s preventing women from seeing the doctor]. That’s not the case necessarily. That’s part of what we’re doing in this program. What are the genuine barriers that are keeping people from getting screened?”

Andrea Rush, administrator for the St. Agatha Foundation, a local organization that helps breast cancer patients pay for treatment, said cost is a barrier even before a single bill goes out. “Sometimes the barrier in going to get tested is because of the financial burden that they know will come,” she said. “It’s not uncommon for people to know … something is not quite right long before they’ve been diagnosed.”

Taylor was one of those women. “I kind of suspected [I had breast cancer] when they told me that I had to go back and see the doctor,” she said.

But, like many women, Taylor didn’t have it on her radar.

“I was never concerned about it because nobody in my family ever had it,” she said. She didn’t do regularly scheduled mammograms as advised, but she did perform self-breast exams from time to time.

Shawni Davis, 32, said she was as uninformed about breast cancer as her mother. “It was shocking,” Davis said of the news.

“I felt sad and hopeful all at the same time,” Davis said. “When you hear that someone has breast cancer, you immediately think the worst. Talking to (my mom), she said that the doctor said that they found it pretty early, so the chances of survival were pretty good. That made me feel hopeful.”

By mid-June 2003, Taylor had surgery for the placement of her portacath, a small device placed under the skin that feeds a vein for the delivery of drugs. By late June, she had her first chemotherapy treatment at the Brittonfield location of Hematology-Oncology Associates of CNY, with her sister by her side.

Taylor ended up in the hospital for almost a week after her first treatment because of a bacterial infection, a common complication, according to the Centers for Disease Control.

Davis, a then-19-year-old Syracuse University student who found herself acting as her mother’s power of attorney, said she was scared out of her mind when she saw her mother placed on ice because of her high temperature.

“It was tough to see her that way. I didn’t know that they actually put people on ice to take their temperature down. These were all experiences that were very new,” she said.

Davis eventually dropped out of school. “It was a lot to try to handle everything. It was just way too much,” she said of her demanding roles of student and caregiver.

She began looking into her family history and discovered that breast cancer was, indeed, a part of it. “There were way more people in my family who had breast cancer than I thought,” said Davis, who eventually went to trade school and now works as an electrician.

FINDING SUPPORT
Taylor, who had undergone a lumpectomy and eventually a double mastectomy, started learning more about how to care for herself as a breast cancer patient and how to find resources to get her through treatment via breast cancer support groups.

Taylor had started attending the groups because she wanted to talk to people who shared her experience.

Gussie Sorensen, a clinical social worker at Brittonfield, helps run support groups for patients. She said that after being in her line of work for 33 years, she knows how support groups can help patients during their treatment.

“I think being in a support group, once you’re diagnosed, in terms of the treatment phase, helps patients understand their disease process,” Sorensen said. “They can learn to advocate for themselves with the medical team. They’re just overall informed in general.”

Taylor said she got practical advice, too. An older woman told her she’d suffered a blood clot in her port because she didn’t get it flushed with saline.

Assistance from support groups and her family helped Taylor finish her cancer treatment in December 2003. By that time, she had undergone the lumpectomy and double mastectomy, a decision she made after enduring the grueling physical pain of chemotherapy. “When I went through what I went through with that chemo, I said, ‘I can’t do this anymore. I want all of it off.’”

Davis said it was tough seeing her mother suffer; seeing her mom lose her hair was particularly difficult. Taylor said looking for a surgeon to perform her reconstructive surgery was the hardest time for her.

Taylor underwent her reconstructive surgery in 2007. She went back in 2011 for more work, and another round late last year.

THE GREATEST CHALLENGE
Beautifying herself as a black woman with breast cancer was more of a challenge for Taylor than she expected. She participated in the “Look Good, Feel Better” program that’s run through the American Cancer Society of East Syracuse. The program provides women with make-up kits and teaches them how to apply it. Taylor said the kit she got initially was too light. “I’m dark skin, real dark,” she said. “I was like, ‘If I put that on, I’ll look like a clown.’”

Taylor would later find her enjoyment in the program when there was a headscarf wrapping session.

Three years ago, she and others she had met founded their own breast cancer support group called Shades of Inspiration.

The group, which consists of 18 women of color, meets once a month. They donate care packages to women with breast cancer at area schools.

“I think it’s awesome,” Davis said of her mother’s group. “I think it helps bring awareness to African-American women, especially in this community, to pay more attention to their breast health.”

Taylor said that through her work, she sees a need to talk about breast cancer in the black community.

Her daughter says her mother is up to this kind of challenge.

“She’s a resilient woman,” Davis said. “She’s built for this.”