Health and a sense of community were the top priorities when Khalid Bey began organizing a fundraiser for the Faith and Hope Community Center. Thirty days later, 50 runners and walkers of all ages lined up in Kirk Park for the Race Against Obesity.

“Kirk Park is hardly ever used for something like this. We wanted to keep it in the community,” Bey said.

The three-mile course circled through Upper and Lower Onondaga Parks before ending back at Kirk. First across the finish line was Analusette Shaello, a friend of Bey’s who came all the way from Binghampton to participate. She said that staying active should be part of everyone’s life. 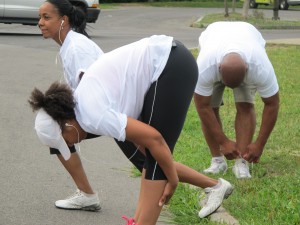 “It doesn’t take money, just the effort to put on some sneakers, and go outside and play,” Shaello said.

“That hill killed me!” said South Side resident Yvette Schoon, as participants enjoyed sliced oranges and bottled water after the run.

Proceeds from the race benefitted the FHCC, where Bey sits on the board of directors. FHCC President Roderick Golden helped to found the center in 2004 with workout equipment from his home. He’s been happy to see the program expand to serve nearly 120 kids this summer.

“We do this to show that there are men in the African American community that do care,” Golden said.

Babette Baker of Tomorrow’s Neighborhoods Today stood at a table at the finish line, handing out questionnaires that asked what residents hoped to see in Kirk Park. She said the group is planning a number of cleanup and improvement projects, like the installation of a new playground in Lower Onondaga Park. In Kirk Park, the group will start work on a walking path in the next few weeks.

“We’re looking to bring people back to parks on the Southwest area of Syracuse,” she said.