Funding was approved for the After School Expanded Fitness and Wellness Program, known as the Fit Kids Clubs, at the Common Council meeting last month. The program started Oct. 13 and will run through Dec. 17. The main focus of the program is to combat childhood obesity.

The fitness and wellness program in Syracuse started in the fall of 2009. It focuses on keeping kids active and teaching them healthy physical and eating habits, said Chris Abbott, program director of the Department of Parks, Recreations and Youth Services. The three programs, one for each the fall, winter and summer seasons, coincide with the school year.

The program is for kids ages eight to teenage years in the Syracuse area, though it’s not limited strictly to Syracuse City School District students, Abbott said. Each of the five sites can hold 25 to 30 kids at a time, so it is more based on a first-come-first-serve basis.

For a child to be obese, they have to be in the top 95th weight percentile for their age group and gender. Childhood obesity has been increasing steadily in the past 30 years, according to a study published by the Center of Disease Control and Prevention published in June 2010. In 1970, only 4.2 percent of children in the United States were deemed obese. In 2008, the percentage increased to 19.6.

Syracuse does not have a large problem with obesity, but it is always a danger to look out for, said Chris Flynn, a youth bureau administrator for the Office of Child and Family Services in Syracuse. The after school program started to stop preventable diseases in their tracks, she said. 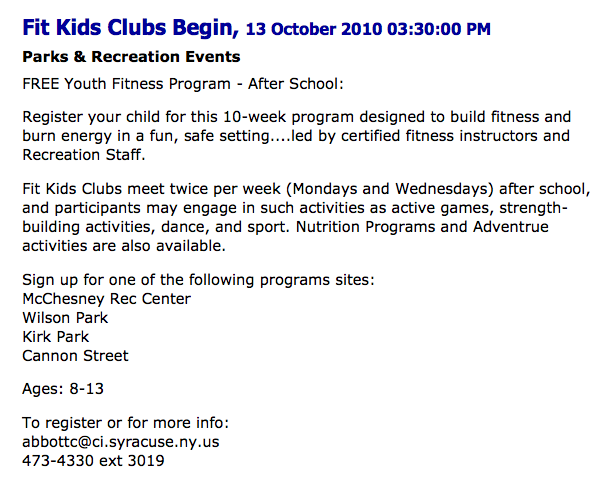 “We find childhood obesity, which develops Type 2 diabetes. It’s not juvenile diabetes, but it’s the kind that has to do with lifestyle decisions,” Flynn said.

“It’s a frightening thing,” she added.

The office is funding the program. For the entire year, the budget is $20,000, Flynn said. The program pays for the different instructors and the venues where activities are held, she said.

Scheduled events for this year include African dancing, bowling and cross-country skiing in the winter, Abbott said.

Nutrition-wise, the Department of Parks, Recreations and Youth Services have paired with Cornell University’s Cooperation Extension, which provides food and nutrition studies for those involved with the program, Abbott said.

Three main classes the program offers are healthy snacking and two cooking classes. One of the best activities the program supplies is a family cooking class, Abbott said. Parents can bring up to two of their children, where they can prepare and cook a meal together. Not only does the after school program help children in the community, it helps develop a family dynamic, Abbott said.

“Parents have come up to me and said how successful it’s been,” he said.

Councilor Seals believes the most important part of the program is keeping kids off of the city streets. “It gives them some kind of goal to reach for,” he said about the program. “It helps them in their development and … helps prevent a lot of delinquency in the schools and even in the streets.”

One thing Seals would like to see the program use is teacher feedback. He said he wants to hear if the structure the fitness and wellness classes have affect children and their study habits.

Though the program is still in its infancy, Abbott said the department is already accomplishing its goal.

“To give our city youth enough options after school, to give parents the assurance that our city recreation services, that’s the point,” he said. “Help them work out and be healthy. It’s part of our job.”