Are You A Match?

African-Americans face an increasing possibility of not finding a bone marrow tissue match — often the only cure for leukemia and other bloodrelated diseases — because of a low number of registered African-American donors.

“Patients are most likely to find a match in their own race,” said Paula Miller, executive director of the William G. Pomeroy Foundation and a local organizer of bone marrow registration drives. “Low numbers of African-Americans on the registry mean that they’re especially at risk of not finding a potentially life-saving match.” 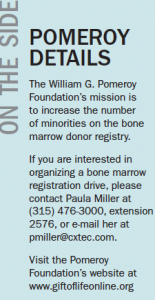 The Be The Match Registry is a national list of prospective bone marrow tissue donors, designed for patients without a family match. The National Marrow Donor Program, a nonprofit organization, maintains the registry.

Because a donor must have the same genetic composition as a patient, family members offer the best chance for a match. Only four out of 10 patients receive the transplant they need for survival. The Pomeroy Foundation partnered with SUNY Upstate Medical University to host a bone marrow registration drive Wednesday, Feb. 16, at the university.

Dozens of students, faculty and hospital employees volunteered a cheek swab, entering their DNA into the bone marrow registry.

Named after William G. Pomeroy, founder of the North Syracuse engineering firm, Cxtec, the foundation’s mission is to increase minority representation on the registry, Miller said. Pomeroy created the foundation in 2005 after he received a life-saving bone marrow tissue transplant.

More than 6,000 people have signed up for the donor registry as a result of the foundation’s efforts, Miller said. About 3,300 of those, more than half, are African-Americans or other minority groups, dwarfing the national average.

“We’ll go in and organize a drive in areas where we know an overwhelming majority of residents are African-American or Native American,” Miller said. “For many, this is their only hope.”

Thurston Bailey, Cxtec employee and a volunteer at SUNY Upstate’s drive, has volunteered at about 20 events during the past four years. “Our main objective is to give people of color an equal chance for a transplant as Caucasians,” he said. “Compared to 2005, we’ve definitely seen an increase in African-Americans on the registry.” 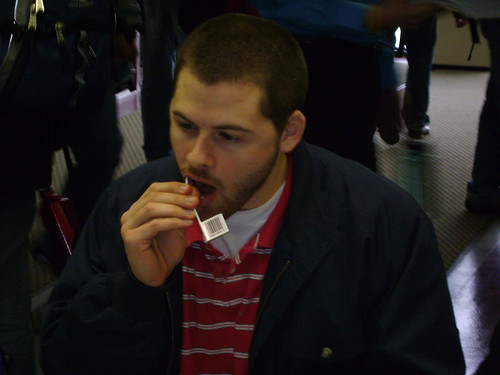 Prospective donors swab their cheek four times to register, twice on each side of the mouth. Doctors test a donor’s DNA to match a patient based on antigens, the proteins on white blood cells, said Laura Kilburg, coordinator of SUNY Upstate Medical University’s Bone Marrow Transplant Program.

Siblings have the highest probability for a bone marrow tissue match, Kilburg said. Half of a patient’s genes come from each parent, so each sibling has a one-in-four chance of being a match. “This is the best kind of match,” Kilburg said.

Once matched with a patient, a donor undergoes several tests for medical safety. In addition to a chest X-ray and heart tests, doctors perform blood tests on the donor’s liver and kidneys. “We have to make sure each possible donor is safe to be a donor,” Kilburg said.

There are two myths surrounding the transplant process, Kilburg said. One myth is that a transplant is expensive for the donor. In cases of sibling donation, the family’s health insurance often covers the procedures. If a donor is not related to the patient, the National Marrow Donor Program covers all costs, Kilburg said.

“They will pay for your hotel, your meals and even fly you into town if you live far away,” she said. “A match is that important.”

The second myth is that the donation process is painful for donors. Donation requires a four-hour blood procedure, similar to dialysis or donating blood. Donors must take four days of medication before the procedure, designed to “trick the bone marrow out into the blood,” Kilburg said. Doctors take just two ounces of blood during the procedure.

“There are no risks at all for donors,” Kilburg said.

At SUNY Upstate’s registration drive, possible donors did not mention any fears about donation. Dan Harris, a first-year medical student, signed his name to the registry and submitted his DNA.

“The reason I’m going to medical school is to make a difference for people who are sick,” Harris said. “Events like these are a huge part of that goal.”