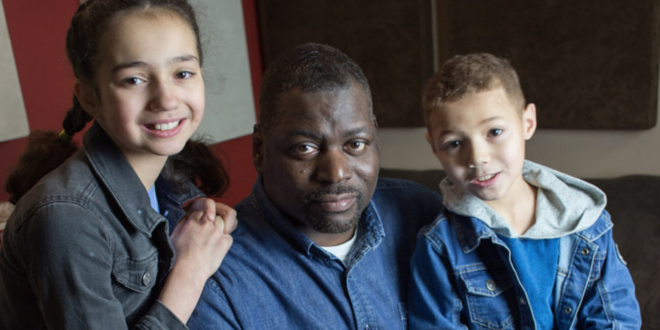 Nominated by his wife Annaliese Perry

Q: What did it feel like when you became a father?
A. I would have to describe that feeling as being excited but scared, not knowing whether I was going to have a boy or a girl at the time, but knowing that I was going to be a father … and knowing that I was going to have to figure out a way to be a provider. I was still in high school and I was still trying to transition as far as having a part-time job. I was also trying to be a young rap star. So, being popular was on the list too, and trying to monetize that hobby into a profession.

Q. What was it like when your first child was born?
A. Unfortunately, I wasn’t present when my first child was born. I went down to South Carolina to do a year of school there. My master plan was to get my driver’s license there (because you can get your license there at age 15). If you’re a New Yorker in the South, you’re super popular, and I took full advantage of that. On my way back home after that year, I came back with my license and I also came back knowing that I had a baby on the way.

I was unable to be present when Andre was born; I couldn’t get down there in time. It was a challenge for Andre’s mother too, being a teenage mom. … At that time, the families thought I abandoned my son, because I wasn’t around. Fast-forward, I did gain custody of my son when he was 8 years old. From 8 to adulthood, he was under my guidance.

Q. What can you share about each of your kids?
A. My oldest son, Andre, is very athletic. I’m a grandfather because of him. He’s very into his children because he has three children, and he’s a good father himself. He’s still a kid at heart. He still plays video games, and he’s actually good at it to the point he’s monetized that.

My oldest daughter, Chanelle, is an entrepreneur in her own right. Right now, she works for Niagara Mohawk, relocated to New York City and also has a side-hustle. She’s into educating herself and pushing herself to do better. She takes pride in her independence. I love that about her. Then, it’s just my babies living with my wife and me now.

Nataylia, 10, is very competitive academically, which I love. She really wants to impress, and she wants people to know that she’s pretty smart. My daughter is a mini-me of my wife. She’s into photography, she’s into reading a lot, she’s not so much into fashion, but she has her own style and is not afraid to express her individuality.

My son, Sabastion, 9, the youngest, looks like the baby because he’s short. He’s a romantic, as my wife would say. He wants to make sure everyone is happy. We call him “the mayor.” He’s really popular at school. Teachers love him. He’s actually one of the kindest people you’ll ever meet. You’ll fall in love with him. We think he’ll be some kind of inventor. He likes to create things whether it’s Legos or other toys we give him. They’re good children. My wife and I adopted Nataylia and Sabastion. They’ve been with us for about four and a half years. They’re incredible. It was a rough start, but right now they’re in pocket.

Q. What was your relationship like with your father?
A. I would say my relationship with my father was a fair one. I wouldn’t say it was the best, but I wouldn’t say we had a bad relationship. I know at times my father had to hold two jobs down. Looking back at it now, I think, (he) provided for the kind of lifestyle he was aspiring to give to us. I wish we had a lot more time to spend together, but, when you’re old enough, you realize he had to do what he had to do. So, I can say this — when we did party, we partied. Even getting ice cream, it was like, “Oh! We’re getting ice cream.” He also made sure we got to some of the big amusement parks or attractions. It was all because of him and his work ethic, so I can appreciate that. I think just knowing he was a provider and understood that role and knowing that I had an example to be a provider myself.

Q. What do you love most about being a father?
A. Learning from our children. When we do homework, it allows that time to bond with our kids. My son is doing research on the White House, and he said, “did you know the White House has 132 rooms?” “No, I didn’t know that!” It’s cool to know that they’re teaching you too, and I think that’s beautiful.

Q. What has been one of your greatest challenges as a father?
A. What’s challenging is a lot of things you try and hide from them that they’re going to find out about when they leave your home. I think when you’re raising a girl or a boy that the goal is for them to be responsible, whether it’s sex, drugs, even music. That’s always a debate. The only thing you can really do is hope you instill just enough for when they explore that they know what the consequences are. That’s a challenge: making sure they’re not in danger.

Q. How special is it to be an adoptive father?
A. I think what I admire most is when they call us Mom and Dad. … There’s no more Tedd and Annaliese, which is how our relationship started. To see them transition in such a natural way and you can hear that tone and emotion in their voice when they say, “Mom,” “Dad.” Boom! These are our kids, man!

To even say that they’re adoptive kids feels so wrong, but I understand that you shouldn’t be ashamed of that either. They know they’re adopted, but that’s just a word. They know that they are extra special, because we didn’t just land into our family… we made our family!

Q. Any advice for first-time dads?
A. I would say to a young father when it’s unexpected is that everyone in that situation is scared. Look to who you can lean on. Your family. My mother was upset at first, but then she accepted it. What can you do? You don’t abandon these kids. I knew even though I wanted to pursue my rap career, I was a father before an artist. The reality was that I had somebody to take care of, so I had to prioritize, and I’m not regretting that. When you’re pursuing your dreams you then have to do double-time. You have to work hard at being a parent, your job, and your passion. Don’t give up on your dreams — learn how to navigate those waters the best way and maximize your time you’re spending with your child and your art. Keep your head up and stay focused.

Q. Final thoughts?
A. I think it’s very important that media outlets like this show this side. For many years there’s just been a lot of negative images of the Black man family experience, and a lot of us were absent from the homes based on our history. We can often chalk that up to it being systemic. But, it’s good to see this series is showing fathers in the home that are doing the balancing act in a positive way. And there’re so many more stories out there that can give a glimpse to who those people are and how they do it.