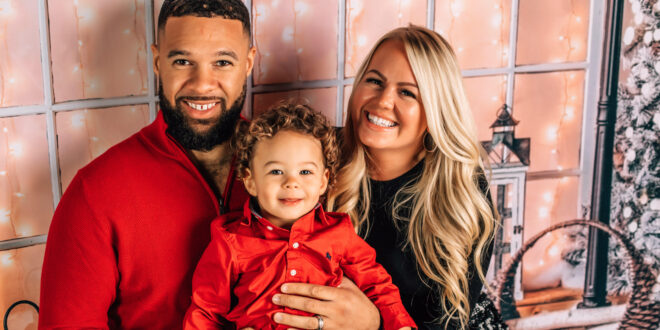 Q: What did it feel like when you first became a father?
A. I’m a pretty new father, as my son was born April 4, 2019. He is nearly 2 years old now. And it’s been an interesting ride — very fun and challenging, especially during these times. It has been everything that I’ve ever asked for.

Q. How has the pandemic impacted your parenting?
A. It has been extremely challenging dealing with COVID and a child that really enjoys being around people. So I feel as if we’re doing him a disservice because, when we first got him, we were going to different baby mommy and me courses, events and playdates. We had him in swimming lessons at the YMCA and would go to the park on a regular basis. All these things literally came to a complete halt about a week before his first birthday. Before he even got the ability to really understand what he was doing and really enjoy it, it stopped. We have been very, very, very careful when it comes to COVID. We try to follow pretty much every protocol that is out there. Washing hands and wearing masks, as well as social distancing and staying away from more family. Thankfully, his (grandparents) babysit him, so he gets that interaction with his grandmother and grandfather on my wife’s side. But he doesn’t get any real face to face time with my parents. I feel this does him a disservice because every interaction comes with new things to learn. At this age they absorb everything.

Q. What is your experience working as a team with your wife in parenthood?
A. We worked as a team before we had a child because we have a business together. This helped us iron out some wrinkles as far as who takes the lead in what situation and who takes a back seat. When it came to my son, we decided, essentially, we both had to agree. If we didn’t, we were allowed to veto each other. So if it was something I really felt strongly about, or vice versa, we can veto each other and say, ‘OK, this is something I really believe in. This is something that I really want to implement for Cayden. I think it would be good.’ As an engineer, I use a lot of facts and research. So, I’ll come up with the reasons why I think we should do X, Y or Z. We aim to come to an agreement on that matter.

Q. What was your relationship like with your father?
A. My father is very, very strict. He’s a preacher. So I grew up with a Christian upbringing. Both my parents are from Jamaica, and it’s a very different world that you live in there. They came here in their 20s with a certain idea of how to raise a child. Growing up I did butt heads with my dad quite a bit because times are different. But I learned from him that nothing is given to you. My dad is a very big advocate for working for everything that you get. He’s also a very, very big advocate for schooling and doing things by the book — essentially, an overall good person. In anything that you do, he’s taught me there’s always a right and wrong. And at the end of the day, you want to look back and be able to say: ‘OK, I didn’t go against my moral code in what I’ve done today.’ And he’s always been there for me. Whenever I have any questions, he’s always around to answer them. He’s more of an old-school father figure where he isn’t as hands-on as my mother. But if I need anything, I can go to him. Some lessons I will model and some things I will not. But I think that goes for pretty much any parent, to kind of give and take. They take some things that their parents did and change and other things that they think they can improve on. And hopefully, it works out for the next generation.

Q. Is there a moment as a father that stands out?
A. When he started saying ‘dada.’ Before this, of course he was my little guy and I loved him to death, but the first time that he said that was absolutely a game changer for me. Then, shortly after that, he dunked on his little tyke basketball hoop. Note, I’m a basketball head. So I completely lost my mind!

Q. Final thoughts?
A. Well, I will say that before being a father, I wasn’t sure exactly what kind of father I would be. I’ve always wanted to have kids. Early on I’d say: ‘I want to have 11 kids — a whole football team, you know?’ When I was leaving college, it changed. I thought: ‘maybe kids aren’t for me.’ I am very ambitious, and I have a lot of things in mind I would like to accomplish. At one point in my life, I saw it as having a child is slowing down that progress. But then as I matured as a man, I realized that, you know, there’s obviously ways to do both. You can make the leap in your personal life while also being rewarded with helping your own child grow and see that their growth also is something that’s an accomplishment as well.