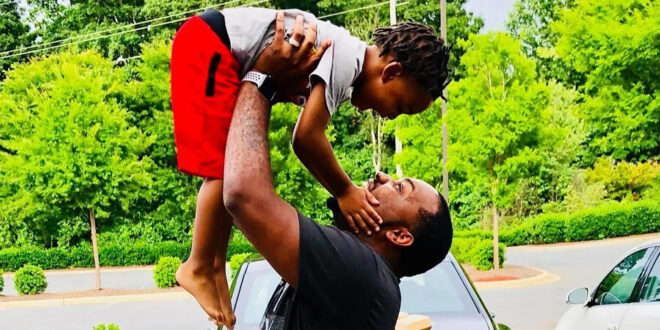 Q: What did it feel like when you first became a father?
A. To sum it up, it was the most amazing, scariest moment of my life.

Q. How did he impact your approach to fatherhood?
A. My dad was always present. He was always there for me. He spoiled me. He gave me pretty much everything I wanted and needed. But he also was there to educate me on the things that my father did not and that my father could not. He was able to help me to grow into a man and do things that my mother could not do. When I became a father, I was able to take a lot of those things that I was taught and put them in place. Now I give my all to my son and make sure that he becomes a great young man and a great father one day, a great husband one day and just an all around great man that individuals look forward to seeing.

Q. As a youth pastor, how does your relationship to your faith impact your approach to fatherhood?
A. The Bible says train up a child in the way that they should go, so that when they are old, they don’t depart from it. So being a youth pastor, it actually helps me to become a major piece in a major role to my son’s Christian education.

Q. Can you tell us a little about your son?
A. He is the most energetic, talented and musically inclined child. He loves to dance. He loves the arts — everything about the arts. And he is a huge Michael Jackson fan.

Q. What is a favorite memory of fatherhood?
A. My favorite would be the times that my son comes and grabs my face with both hands, looks me dead in the eyes and tells me he loves me.

Q. What has been your greatest challenge as a father?
A. My greatest challenge has been trying to break the generational curse of not being enough for my son. I know that I do the best that I can, and I am very present in my son’s life. I’m very active in my son’s life. But many of the generations that have come before me failed their sons in my family, and it frightens me that one day, I just don’t want to be like them.