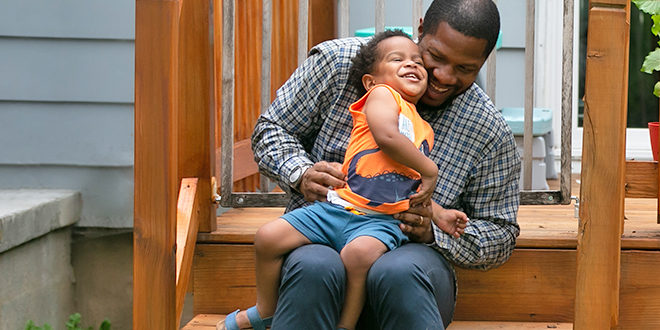 Q: What did it feel like when you became a father?
A. Having a child when you are financially in a position to take care of that child and in a relationship where you understand what will foster a healthy upbringing is the key foundation you need. At the delivery, my goal was to keep my wife as comfortable as she could be, since she was in labor for over two days. My priority was ensuring she was healthy and keeping the energy up. I didn’t show any nerves because I knew we were going to be fine. I just had that feeling.

Q. Describe that moment when you found out it was a boy?
A. At the gender reveal, the doctors and nurses were playing a trick on us. They used pink Post-it notes to reveal the news. [Chaplin motions with his hand, flipping imaginary pink pages and recites the words on each note.] ‘It’s … a …’ [He continues, motioning to a final sticky note with blue ink] … ‘boy!’ When I saw those pink Post-its, I just knew it was a girl. They said, hold on, there’s writing on it.

Then at the gender reveal party with family, we had clear balloons with blue balloons inside at the bottoms. Everyone was anticipating all the balloons to fly up out of the box. My dad came up for that. He was elated at the news, and I have so many memorable pictures from that day.

Q. What can you share about your son?
A. Owen Malachite Chaplin will be 2 in October. He’s got his own personality. He’s independent. He’s not really an outgoing kid but at a recent party he spent the entire three hours dancing, watching others do the Electric Slide. He just read the vibes from the room. He’s very joyful.

Q. Does his name have a special meaning?
A. His first name is a spinoff of my wife’s maiden name, Owens. She lost her father and sister sooner than she should have. So his name pays homage to her father’s side and the legacy of the Owens because she was the last on that side other than her nephew. His middle name came from Googling a bunch of names with significant meaning, that were rooted in purpose and would foretell what he would become. Malachite is a green Earth stone and means someone that is going to be a leader, who is well-rounded, well-traveled and cultured.

Q. What was your relationship like with your father?
A. There are two perspectives. When I was a child, my mom and dad got married when I was around 2 and then got divorced when I was 3 or 4. Around that time, he left the house. He lived in the same city as us until we moved when I was 8. But my whole family lived in that area in Peoria, Illinois, so we would come visit, and I’d see him now and again. I was a dad’s boy, probably because I didn’t see him much. Every time I did get to see him, it was like Christmas. Even though he was right around the corner in some sense, there were a lot of broken promises, missed birthdays and holidays. He had me at 19 and my mom was 20. Given his own upbringing, I learned later in life he did the best he could under the circumstances. … It took until I got older to understand it needed to happen this way and that this designed me to be who I am today. Someone who is strong, who has perspective. It fostered my way of viewing life — you must work hard and be intentional. My goal is to make sure my son has a great relationship with his grandfather, even though he’s not close by. We do a lot of Facetime. I want my son to recognize him, and he does — that’s grandpa with good vibes and good energy.

Q. Is there a characteristic you share with your father?
A. His laugh. I got his freaking laugh. Every time I hear myself, part of me cringes because I hear him. I look a lot like him too. My wife will say we’re nothing alike because he’s so extroverted and I’m not that party guy. He also has a great work ethic, and I think I got that dedication and focus from him. He still has the same job he had since I was 1. So I pulled from him the good things I saw.


Q. What do you love most about being a father? A. I think the opportunity to raise a young black man in America. I didn’t know about a lot of the cultural challenges we have as a nation until college. I started to become ‘awake.’ I think the Obama administration helped and was a pivotal time for me as a college junior. I cherish this opportunity to raise him as a well-rounded black boy.

Q. What has been your greatest challenge?
A. Sleep deprivation. I’m still adjusting and haven’t really recovered. He’s not a great sleeper and I’m not a deep sleeper, so if he wakes, I wake. I think the bigger challenge is the foreshadowing of living in Syracuse, from a cultural perspective of understanding this city’s uniqueness from a demographic, social and economic status perspective, and understanding what kind of school he’s going to attend. We obviously want him to get the highest quality education possible, but we also want him to have the richest cultural environment possible. And those two dynamics don’t exist here. So you either have a private environment that is non-diverse or a public environment that lacks a lot of other structures. It’s left us with questions of what do we do?, because we can afford to do anything. But what is best for him? Then again, we were public school through and through and we turned out well, but with the next generation you always want them to one-up you. So if we can have him do that with an education rich in cultural and intensive instruction, we’d feel better about that and how he’ll be prepared for high school and higher education.

Q. Any advice for first-time dads?
A. In the months leading up to the birth, spend as much time as you can dissecting how you were raised, how many parents you observed and have a sense of what kind of father you want to be. Along the way be willing to make adjustments with your spouse and with yourself. If you go into it thinking you want to be the perfect dad, that’s cool — just know you won’t. Aim to be intentional. Ask yourself what can I do today to be better?

Q. Final thoughts?
A. Thank you for nominating me, and thank you for The Stand for providing this opportunity for fathers from the community to be recognized. It’s unfortunate, but there’s still a lot of stigma about black dads. And so to the extent that we do something to break down those stereotypes is great — and a lot of those stereotypes are born out of social policy. So I think it’s critical and imperative for news outlets to do this. I think every news outlet needs to have a spotlight on breaking social constructs that are patently false and counterproductive to future generations … beliefs held as truths by society based on nothing other than ignorance.