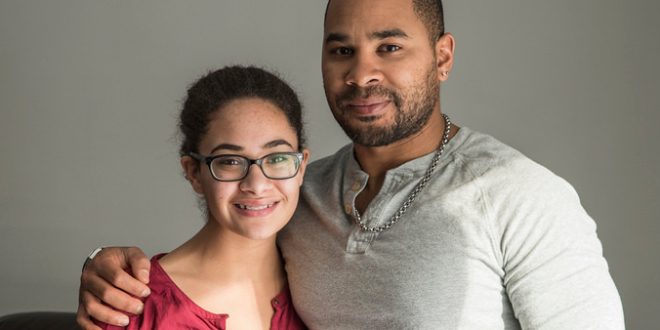 Q: What did it feel like when you became a father?
A: When I first became a father, I had just turned 18, was still in high school and was terrified. I had no idea what I was doing. I was just a kid myself. I would learn that it didn’t matter how old you were … you would figure it out through trial and error. So at first I was terrified, but eventually it became something that was really easy and fun to do. 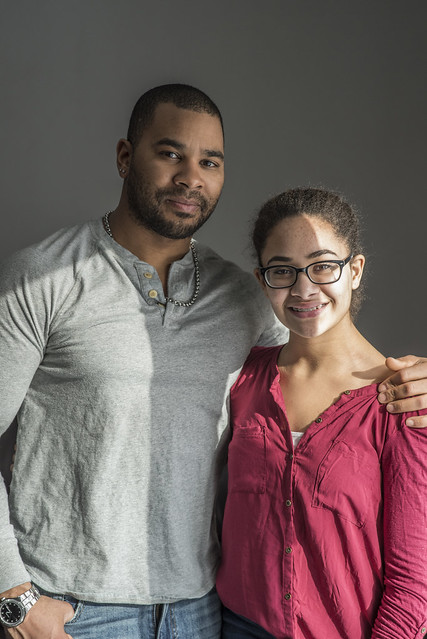 MEET FATHER ALEX: Morris, 32, works as a gas mechanic with National Grid and has one daughter. The pair often volunteer at Syracuse Community Connections and with their church, the Abundant Life Christian Center, during its Reach Saturdays. These are huge outreach events the church conducts every other month where members distribute food to the hungry, participate in a community cleanup or visit with the elderly. | Ben Cleeton, Staff photo

Q: Now you have a teenager, how scary is that?
A: It’s scary in the sense that technology nowadays is so vital to these kids’ upbringing. And whether you like it or not, it’s there and the kid probably knows how to utilize it better than the parent. And with social media, there’s so much I don’t know; I don’t even use social media, but my daughter does. You hear these horror stories … so I believe it’s all about communication. I try and talk to her about everything. And in the sense of me being younger, that’s a plus for our communication because I think it might be a little easier to talk to each other, in the sense that I’m not so far removed from her generation. We talk a lot and communicate as much as we can, and she gives me a lot of reasons to trust her.

Q: What else can you share about your daughter?
A: Mia is definitely outgoing. She’s on the honor roll every quarter and loves to read — not just books, but she will read entire series. She has an awesome imagination, which I think helps her have fun even in the most stressful of times because she is able to kind of go into another world if she needs to. She’s very creative, artistic and overall a very positive person.

Q: What was your relationship like with your father?
A: My dad was one of the nicest people I knew. Just seeing how he interacted with strangers, peers at my school, other adults and family, he just set the tone for how I would handle myself in certain situations. Again he was super nice, super professional, always willing to compromise. Just always doing the right thing. And I think that’s where I get it from.

Q: Did he have a saying?
A: One of the things that I remember that always stuck out was: “Celebrate success, even when it’s not your own.” And it’s just one of those things that when you’re younger you don’t really understand … like why would I be happy for someone else … especially if you’re in a competition? But now it’s absolutely something I try and tell Mia. The older I get, the more I realize he was trying to teach me the secret to happiness, the secret to success, to be happy even when it’s not about you.

Q: As a father, is there anything that you do that would surprise people?
A: That I speak frankly about the realities of sex with my daughter. I think it’s important that she understand the consequences, be aware of peer pressure and be prepared. This way she can make the right decision when it is the right time. It is up to you as a parent to arm them with the right knowledge. I trust her. Even though I tell her she doesn’t need a boyfriend right now, I have to face the reality. So, I let her know she is her own person and can make her own decisions. We have a lot of open conversations because I want her to know she can talk to me about anything, anytime.

Q: What is your opinion about commonly held stereotypes about black fathers?
A: I think it’s unfortunate that there is that stereotype that a lot of black dads aren’t there. But there’s a problem and that’s where the stereotype comes from. We can’t fix everything as far as we can’t make every dad take care of their kids, but I feel like as individuals we can help to change the perception of the lack of fathers in the black community. And it’s not easy. Honestly, as much as it sucks, I understand sometimes why guys feel that the system is against them, that it’s too hard or they have to play by someone else’s rules. For example, they can only see the kid when the mom lets them. But we played a part in bringing that kid into this world, so it’s not up to you to say you don’t want a part of this. As black fathers, I think we have to look inside ourselves to change the system, so I’ve got my fingers crossed.

Q: Can you elaborate?
A: I have a lot of fathers in my circle. The difference is a lot of them have younger kids. Because of my upbringing and my presence in the community, I have friends who are white who are dads and I have friends who are black who are fathers, so I am able to see both sides. In my circle, I only see positive. I know dads right here in the city that would do anything for their kids, and they are there all the time. On the other hand, I see dads in the white community who are in the same situation and they don’t always do the right thing. So I’m in a position where I get to see both sides.

Q: Any advice for first-time dads?
A: No matter how hard it seems — or impossible it seems — you owe it to your child not to ever give up. Even if it’s one weekend a month, supervised — do it. Do what you can.

Q: What has been a favorite tradition?
A: One thing that is special for us, we do Christmas a lot different at my house. We go over the top with decorations, but on Christmas Day, we do not exchange gifts. Over the years I have realized — just within my family — how meaningless those material gifts can be. So we decided to do things for each other in the form of gifts without all the materialist stuff. On Christmas Day, together we might bring groceries to someone less fortunate. We might go shovel off someone’s driveway who is a little older and has trouble doing it. The goal is to do something that is helpful for someone, something that you can’t go into a store and buy. That’s what we’ve been doing for the past few years.

Q: Final thoughts?
A: It’s a goal of mine for Mia to grow up knowing that she was loved and to help the less fortunate in any way that she can.