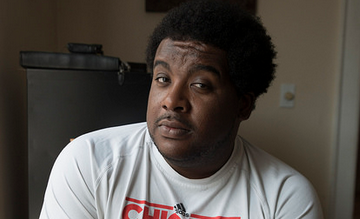 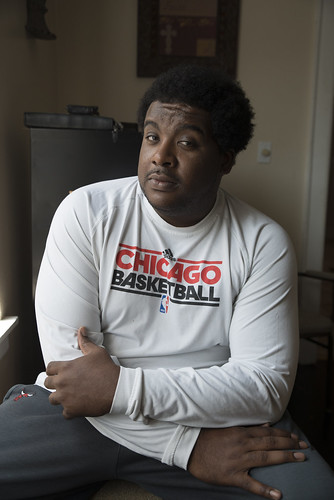 MEET FATHER D’SHAUN: Thompson, 42, is retired from the military and is a father of three and stepfather of one. He believes children need both parents. | Ben Cleeton, Staff Photo

Q: What did it feel like when you became a father?
A: That doubt. Questioning yourself if you’re fully prepared to be responsible for someone else. It was a bunch of emotions not just one thing. Each child presents us different challenges, but it’s covering the basics and then implementing as you learn along. That has been my way of parenting.

Q: What can you share about your children?
A: Myah D’Shaun is 21, and she has a solo mentality. She’ll listen to advice, but in the end, she’ll complete it her way. Tatiana, 20, is the quiet one. She’s introverted and has her mother’s personality and ways. She’s going to observe you first, then open up to you. Danjai, 19, is my only son and an athlete. He’s tried his hand at all sports. LaTonya, 17, just graduated high school and is finding her way to college. She’s inquisitive.

Q: What was your relationship like with your dad?
A: It was a real good relationship. I would ask him questions on things I didn’t know. I had two brothers, one younger and one older, but I was the one that would ask things from my father. So we had a different relationship than he had with my brothers. My brothers didn’t engage him like I did. We had more of a dialogue together. I wasn’t a momma’s boy; I was more of a daddy’s boy.

Q: Why are fathers important?
A: They are equally important. They are supposed to give a different type of love than the mother gives. It’s not necessarily always the discipline and the tough love but it’s just a balance. Kids need that balance. You can’t get everything from just one. There’s a reason there’s two of them.

Q: Is there a saying or advice you always give?
A: I tell them to try the right thing first. You may find a shortcut, but overall the right thing — the right, long, hard path — usually works best.

Q: What do you think about assumptions held about black fathers?
A: Perception becomes reality for people that are not intimately involved with it from day one. I was involved. From making doctor appointments to dental appointments — the full spectrum of being a parent, not just what the typical father does. The negative stereotypes, I think have been overblown. It’s been drilled into people’s heads like this is normal, when it’s not. It’s not what I see. The majority of my friends are involved fathers, and the majority of my family are involved fathers. So that’s definitely not my reality.

Q: As a father, is there anything you do that would surprise people?
A: Being a single father, especially of a daughter. People ask, ‘Who lives with you?’ It’s just me and my daughter, and (my response) is followed up by, ‘and who else?’ There’s no tragic story to it. She started straying from her studies and with the amount of time she was spending over here, anyway, before it got severe, I suggested to her mother that she move in here full time. There was no bitter custody battle; it was just what was the best for our daughter.

Q: Any advice for other dads?
A: Never break that bond. Create that bond from day one and never break it. No matter what happens with the mother, and no matter how much your kid challenges you — they are only doing what they are shown, either directly or indirectly, by you or their environment — never break that bond. Kids naturally want it the easy way. It’s OK to have fun with kids, but I don’t believe in being their friend, especially in their formative years. It blurs the lines on authority with them. They may share with you more, but to me it’s not that healthy. Where they almost feel like a peer to you, especially after they mature. If they (then) start straying down that wrong path, you can’t reel them back in and reteach things that you should have been doing 10 or 15 years ago.

Q: Final thoughts?
A: Accept the challenges of being a parent and don’t take it for granted.