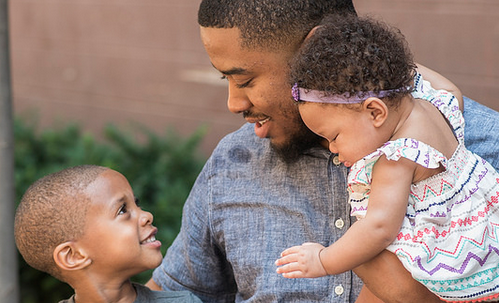 Q: What did it feel like when you first became a father?
A: I felt like I suddenly had to become an adult. I wasn’t just living for myself anymore. I had a responsibility to take care of another human being. It’s a lot of pressure, but it’s a great experience and there are many rewards. 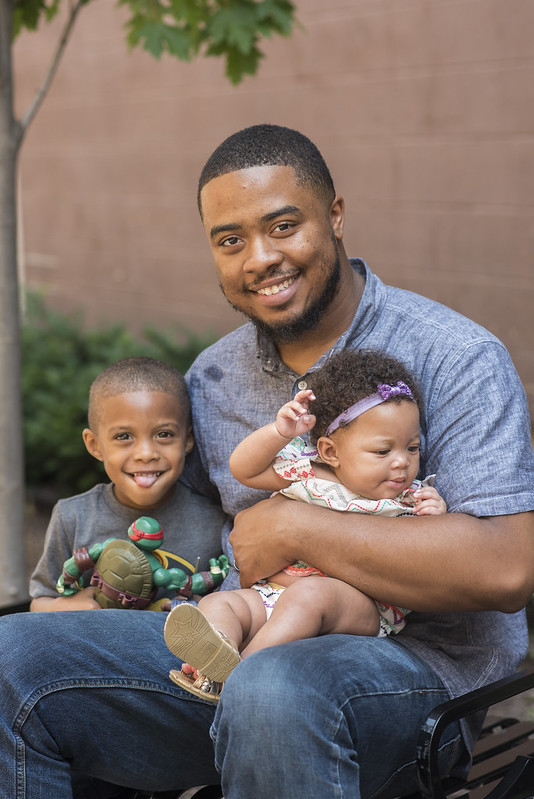 MEET FATHER Deyquan: Bowens, 27, has two children with his wife Yajha, his high school sweetheart. He plays the piano and guitar and is owner of Kue Musik Entertainment. He sits with his son Deyquan Bowens Jr., 3, and newborn daughter Ahjay Bowens. | Ben Cleeton

Q: What can you share about your children?
A: My son is Deyquan Bowens Jr. and he’s 3. He’s energetic and smart — talks a lot. His favorite color is green, just like his dad. He plays the drums and likes to sing. My daughter is Ahjay and is 4 months old. She’s the exact opposite of him. She’s laid back and will go to anyone. They balance each other out very well. He was a little jealous at first when she arrived, but he’s been helpful and caught on very quickly. My son has more of my personality. I’m ashamed to admit it, but I was a cry baby growing up, and he’s the exact same. She takes after her momma — very quiet and happy all the time. She only cries when she’s hungry and sleeps through the night.

Q: What was your relationship like with your father?
A: My father was also a musician. He had a band called The Bowens Brothers. It was his brothers Lonnie, Dan and John, my father. This was in the ’60s and ’70s. He worked all the time and taught by example. My brother and I watched him and learned the value of being a hard worker. It was through his example I also learned the value of being a dad. I didn’t understand it when I was younger, but now that I’m older and have children, I see the value of just him being there.

Q: Are there similarities in your parenting style with how your dad parented?
A: I tend to lead by example. My thing is that your actions speak louder than words. I feel my son remembers more that he sees rather than what I only tell him. For example, if he sees me treating his mom with respect or giving her a hug before she goes to work, then he follows. And it’s teaching him to be respectful towards women and to just be a nice and kind person all around.

Q: Is there anything you do as a father that would surprise people?
A: I don’t think anything is surprising, but I would say I’m always nervous about what my son might say in public. That’s one of the scary things right now. No one is perfect and you may slip up and say things at times you don’t mean to. (With a big laugh, Bowens looks off remembering an incident with his mother.) In short, my son repeated a popular saying that was going around about a year ago that he heard me say jokingly with a friend. While in the car with his grandmother, he repeated it and got in trouble. And I got an earful from my mother. So, as a reminder: Watch what you say around your kids because it will come back to you.

Q: What’s your opinion about commonly held stereotypes about black fathers?
A: The two common ones I hear are that black fathers aren’t around and fatherhood that they don’t care; they are just donors. I’m around a lot of positive people of all races, and all the guys that I know, they put their families first, including myself. Everything they do is with their children in mind. The media gives black men a bad image, but there are a lot of great black role models out there.

Q: Any advice for a new father?
A: Stay positive and surround yourself with like-minded individuals. If you believe in God, keep him first in everything you do. And enjoy the moments. The little things matter. Spending time being there, that goes a long way.

Q: What is one of your favorite moments with your kids?
A: One of my favorite moments with my son actually happened this year. I play the piano at my church, the Promise Land Church, and our drummer was late one day. My son seized the opportunity and came up and got up on the drums and started playing. And he held a good beat. I was very proud that the musical example that I set for him has paid off and he’s interested in music. With my daughter, for now anytime she sees me is my favorite moment. She always smiles when she sees me. She’s a daddy’s girl.

Q: Final thoughts?
A: I just thank you for this opportunity and thank The Stand for the great job they are doing showcasing fathers from around the neighborhood. It lets people see fathers that are doing something, and it’s refreshing to hear good news rather than all the negative things happening locally and nationally in the news. This gives hope to other fathers and just men in general that there is positive in the community.