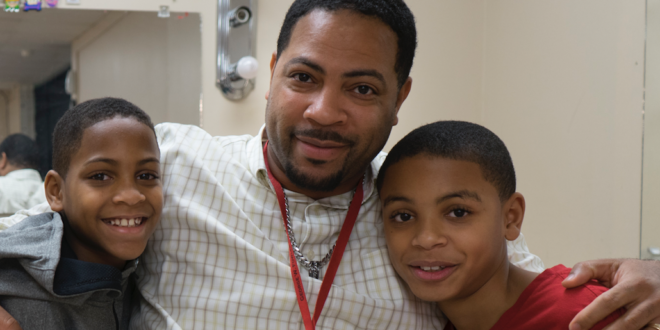 Q: What did it feel like when you became a father?
A: It was a mix of emotions. Happy, excited, enthused, nervous, scared, unsure, doubtful. We knew it was going to be a boy. With the first, we wanted to know. I was there for the birth, and I was strong. It was amazing to witness that moment. To see a woman go through that for me. It was exciting, and I was blown away by it.

Q: What can you share about your two boys?
A: My oldest is Prince, 11, and Christian will be 10 this month. Prince is the philosopher, very analytical. Thinks a lot. Analyzes. Then once he comes up with the answer, he analyzes that. Christian is the doer. He does before he thinks. I see myself and my wife in both of them. Neither is more like me or her. They are both outgoing and outspoken like me, but they get the thinking and processing from their mom. And they get their good looks from their mom. 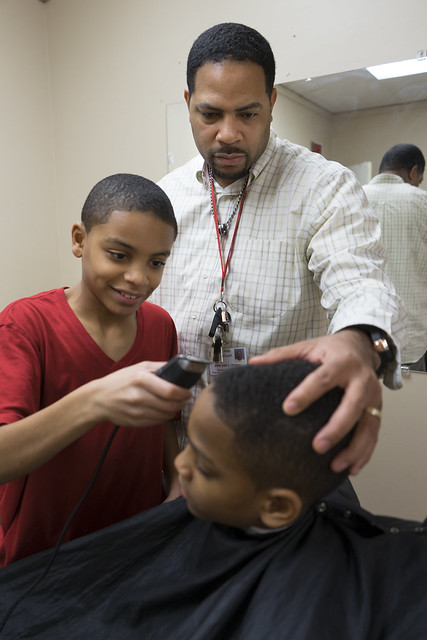 MEET FATHER ED: Perry, 37, who works for the school district teaching students how to cut hair, shows his two sons how to properly use a clipper at E-Clipz Barbershop, which he owns. It is located at 4714 S. Salina St. Perry has been married to his wife, Juanita, for 11 years. | Marianne Barthelemy, Staff Photo

Q: What was your relationship like with your father?
A: It wasn’t the best. He was in and out of my and my siblings’ lives. He was into a lot of negative things, which kind of helped me as a dad because then I had something to say that I did not want to be like. I don’t fault my father, but his actions when I was younger greatly impacted me on the type of father I am today. I want to make a difference in my kids’ life. Although it was a negative for me, I turned it around and said, ‘I can use that for good.’ We have a work in progress relationship now, and I love him dearly.

Q: Why are fathers important?
A: A father is the first role model in a child’s life. The one to teach them about things that some other people can’t. A mother can teach but so much. A grandfather can teach but so much. And I had the privilege of having different male role models be a positive force in my life, but it’s still not the same as the dad. So I think the role of a father is to serve as that first role model.

Q: As a father, is there anything that you do that would surprise people?
A: I play doctor dad. They’ll get a little splinter and go crazy, and I’ll say ‘Here comes doctor dad’ and go in and doctor it up and make them all better.

Q: What is your opinion about commonly held stereotypes about black fathers?
A: There are many that say there aren’t any good dads out there in the African-American community. However, that’s a perspective from the outside looking in. But me, being an African-American on the inside looking out, I see a number of African-American fathers that are in their children’s lives.

Q: Any advice for first-time dads?
A: Stay faithful. It’s like anything. It’s going to have its good and its bad. You just have to let the good outweigh the bad. And seek advice. There’s nothing wrong with seeking advice from other people that have been where you are at. Seek out wisdom and seek out help. I think there’s a saying, ‘Iron sharpens iron,’ meaning if I’ve been somewhere and I can give advice, then I should share … people did it for me so I feel I should do the same. Pay it forward.

Q: What has been a favorite moment as a father?
A: We still sit down together and have dinner. We do it at least three to four times a week. That’s our come together as a family, let our hair down. That quality time, making sure I’m in my children’s lives — those are the things that build their character. They may not understand it now while they are young, but when they get older, the values that dad taught, that mom taught, they’ll be able to use. Those are the good things from my perspective.