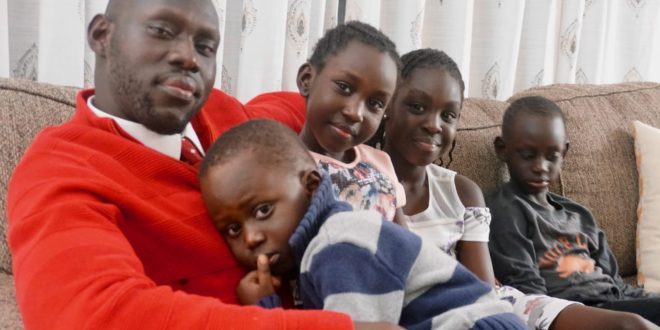 Q: How did it feel when you became a father?
A. I looked at my kids and could not imagine them going through a lifetime by themselves. Growing up without a father, I knew I had to make a choice. A choice to be there for my kids, to support them, to discipline them. It was a lot of pressure, but I was so thankful. I have such a beautiful wife and kids. I want to show them whatever you do, you always have a choice.

Q. What can you share about your children?
A. I sometimes sit down with them and just have a conversation. And I always say, wherever you are, always do your best and always be strong. I remember Akau used to ball every time his mother dropped him off at school. One night I sat him down and said ‘When momma takes you to school, you have to learn to be strong for daddy; don’t cry.’ And we do this thing where we show each other our muscles and Akau said ‘I want to be strong like you.’ Now he does not cry when he gets dropped off at school. He says he wants to be strong like me. It’s a responsibility, being a father, they look up to you and I remember that when I’m with them.

Q. What was your relationship like with your father?
A. The little bit I learned today I learned from my father in the eight years I spent with him. Where I came from, it’s very patriarchal. You learn to be a man through your dad. My father was one of the first people to be drafted into the first infantry. My father was not absent by choice. It was necessary to fight. Many fathers were drafted into the war and never came back… When he was there, he was there. He gave his life to serve his country and showed me the discipline of public service. He is why I am where I am today.

Q. How did his absence affect you?
A. It has affected my confidence … it deprives you of things that you need to learn as a man. There’s certain things now as an adult that I catch myself doing that if my father was around I would have learned not to do early on. I try to remember to be sensitive. All my life I had to protect myself. It was not until I met my wife that I learned to be vulnerable. If you do not learn to be vulnerable, to be open, you cannot love.

Q. Did he have a saying?
A. One time my father sat me down. We were farming. And he said to me ‘Chol you’re going to be somebody great one day.’ That stuck with me. More than anything my dad was special to me. Because I came from that culture where as a young son, you got to be like your father.

Q. What is your opinion about the commonly held stereotype on Black fathers?
A. There is a difference between father’s here and fathers where I come from. When a father was not in the picture where I come from that is because the war had taken them away. But, when I came here, I saw so many boys that were fatherless. I realized that there is something about fathers’ disciplining their sons … Men have to be disciplined, otherwise all of that aggression becomes different. If that aggression is not disciplined and contained, it can become a problem. This society is very unforgiving. It’s hard to climb back after you slip up and our system is so punitive to the point where you don’t get a lot of second chances. We need to be strong. We are today’s keys for our sons to be better fathers tomorrow.

Q. Final thoughts?
A. I could have came here and felt this life is hopeless for me. If you have lived the life I have lived today, you know as long as you are still breathing, you have a chance to make a choice about how you want to live your life. Do you see yourself as a victim, or do you see an opportunity? I hope my children can thank me in the future for showing them that, that hard work and public service is the means of a fulfilled life. That is what my father showed me, and even though he passed in 2003, I will always thank him for that.