Students Learn About Women and Minorities in Science

On an average Saturday Morning one may expect to see kids waking up to early morning cartoons. But on Saturday Jan. 21, some 30 students and their parents sat listening attentively to business executive Monica D. Johns speak at the Junior Cafe Scientifique lecture series at the MOST museum.

The lecture series is sponsored by the Technology Alliance of Central New York. Johns, president and CEO of Clarity Management Consulting, was there to talk about the women and minorities that have impacted the world of science, technology, engineering and math. These subjects put together are collectively referred to as STEM. 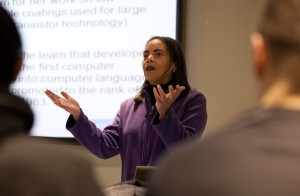 “Does anybody know how many women astronauts we have had?” Johns asked the children in the audience.

The answer was 55 and Johns told the children that with hard work and dedication they too could be like Ellen Ochoa, the first Hispanic woman to become an astronaut. After her lecture, Johns addressed the importance of encouraging children in their education because they are often bullied in school for being intelligent. She said this is especially prevalent amongst minorities.

“We don’t have enough people of color going into STEM,” Johns said. “When these kids do excel in the math and sciences other kids are bullying them, beating up on them if they are smart,” she added. “What we need is for young people to say ‘You got an A?’ That’s great. Help me to get an A too.”

Johns was not the only adult encouraging kids to excel in the STEM field. David DiMaggio attended the event with his 12-year-old granddaughter. He is a manager of the Case Co-op program at Syracuse University which helps to find graduate students part time employment with local companies involved with computer science and engineering. Inspired by the speech DiMaggio raised his hand to speak and said that not enough American students get involved with the sciences and encouraged them to consider a future in the field. 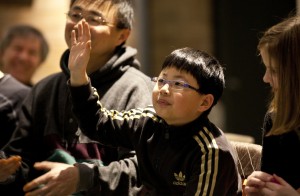 Eliza MacCaull , DiMaggio’s granddaughter is a sixth grade student  at West Genesee Middle School and she already has an idea of what she wants to be when she grows up.

“I want to be a dancer,” MacCaull said.

For Johns, the idea that learning is fun is pertinent. She concluded her talk by telling the her audience about the advantages of getting good grades. She said being smart has allowed her to travel around the world free of charge, including a business trip to Australia when she worked for General Electric.