At various times, you can find women huddled in masses, sobbing, or men breaking out into complicated tap dancing. There are musical instruments and feathered boas strewn about the closets. But this isn’t some bizarre ritual — the congregation of this South Side church is spreading the word of God through the stage, rather than the pulpit.

Appleseed Productions has been run by the Atonement Parish since 1993, when a group of parishioners decided that they should use their creativity — and solid volunteer force — to bring ethical and entertaining plays to the community.

Now, 140 plays later, they’ve performed everything from “Macbeth” to “Children of a Lesser God.” Most of the shows have one theme in common: a lesson in morality that is meant to teach the audience some sort of positive message.

The Rev. Nelson Gaetz has seen the ups and downs of this community-based theater, and has tried to play an active role in engaging his congregation in the running of it.

“Showing the evolution of Martin Luther from a regular cleric to the founder of one of the most scandalous and contentious religious splits in the history of the Catholic and Protestant religions is very important,” Gaetz said. “This isn’t just about Martin Luther, this is about the internal struggles everyone faces.”

And while Luther may seem like an overtly religious and obvious topic for a church to tackle, striking the balance between how to preach without preaching is something with which the church struggles. 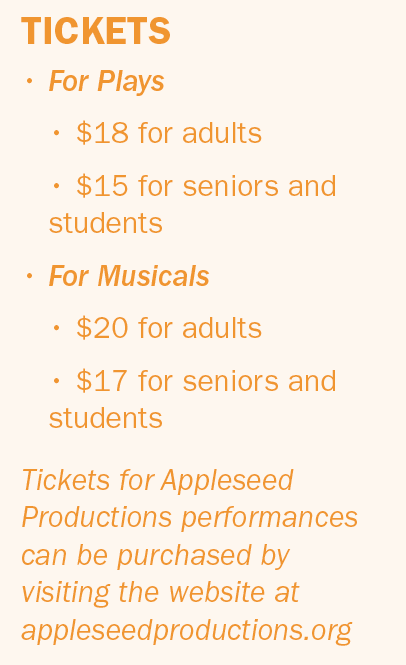 “People get their sermon from me on Sundays,” Gaetz said, laughing. “They don’t want or need a double dose of it on a Friday or Saturday night. But that doesn’t mean we can’t have a message in our storytelling and entertaining.”

To bring a “night-out” feel to the performance, the group also provides desserts and coffee during the intermission so that the audience can mingle and even get the opportunity to chat with other volunteers who aren’t quickly changing or preparing for the next act.

“We do this because it’s fun,” said Meghan Pearson, a director of Appleseed’s September production of “Parade.”

“It’s a way for us to get close to our neighbors and community members while still following our passion.”

However, there are limitations to those performances. As it is run almost solely by volunteers, it’s often difficult to keep people heavily involved or invested performance after performance, season after season. There are dedicated groups, but there’s also a lot of turnover.

While some shows have been more successful than others, the group still finds enjoyment in every show.

“There’s nothing like a standing ovation,” Pearson said. “Especially when it’s coming from your friends and neighbors.”