South Side residents had a chance to be treated to a spectacle whose first performance, in the early 17th century, was held at Hampton Court Palace in the presence of King James I of England and King Christian IV of Denmark, according to history scholars.

On June 22, theater lovers converged to the Atonement Lutheran Church at 116 W. Glen Ave., in the southern quadrangle of Syracuse, to see what is hands down the shortest of William Shakespeare’s tragedies, “Macbeth.”

The Atonement Church usually stages plays by Appleseed Productions, its affiliated theater company, but, in this occasion, “Macbeth” was presented by the Red House Arts Center. The local adaptation of “Macbeth,” by director Stephen Svoboda, shortened the narrative even more although not down to 60 minutes as promised in the center’s brochure. Instead, it ran for 90 minutes. Also, the brochure stated that the adaptation is “set in a 20th century militaristic society” when, in actuality, the atmosphere suggests that it’s set in the 11th century. 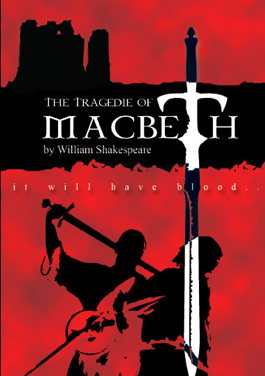 The original play is a fictionalized account of the historical record found in the “Holinshed’s Chronicles,” which depicts Scotland as an absolute monarchy where the king is chief executive office, chief legislative officer and chief judicial officer. One of his primary duties is to enforce the maintenance of a system in which part of the fruits of the peasants’ labor is appropriated by the noblemen, supervised by thanes, the local version of counts.

Another of his duties is to repeal the periodical incursions by Norwegians, Irish and English forces, which, sometimes side with warring factions within the Scottish aristocracy.

A distinctive feature of the Scottish monarchy is that it isn’t hereditary. Even though the king appoints his successor to the throne, the appointment doesn’t have to fall on a relative of his.

In the classic “Macbeth,” there are more than 40 named and unnamed characters, including several apparitions such as the spirit of a cat.

After having dispatched Macdonwald in the first battle, Macbeth, in his return with fellow commander Banquo, runs into the three witches, also known as the three weird sisters. Without even having to consult a crystal bowl, the witches prophesy that Macbeth will become Thane of Cawdor and eventually king of Scotland.

King Duncan rewards Macbeth for having defeated Macdonwald and a “coalition of the willing,” composed of Norwegian and Irish allies. Macbeth is designated as the new Thane of Cawdor while retaining his title of Thane of Glamis. The consolidation makes him the most powerful thane in the kingdom but he is disappointed when Duncan chooses Malcolm to be the next sovereign.

Macbeth, high on an ego trip, comes up with a clever scheme. He decides that regicide is the short cut to the throne. After the royal assassination, Malcolm and Donalbain, Duncan’s sons, flee to neighboring countries without explanation, casting a thick cloud of suspicion over their heads. Macbeth proclaims that regicide is in addition parricide with the brothers becoming the whipping boys

Once comfortably installed in the Scottish throne, Macbeth sets out to prove that Macbeth doesn’t rhyme with death for nothing. He goes on a killing spree, which includes infanticide (murdering Macduff’s young son) as well as garden-variety homicides.

There is plenty of gore in the original play, enough to consider it as a precursor of the slasher genre, which features the likes of “Friday the 13th” and “The Texas Chain Saw Massacre.” In these two movies, their antagonists, Jason Voorhees and Leatherface, respectively, use a machete and a chainsaw, whereas Macbeth favors a dagger and a sword. Banquo, Lady Macduff and Macduff Jr. have their throats cut by hired hands. Macbeth himself disembowels Macdonwald and beheads Siward Jr.

A philosophical question that arises in regards to the play is that of pre-determination versus self-determination. Was Macbeth powerless and had no choice but to fulfill the witches’ prophecies or did he have free will?

In the first alternative, Macbeth could have said: “I’m squeaky clean, I’m blameless. The witches made me do it. They were the ones to blame as they pulled my strings.” The first alternative seems to be the most likely scenario if we consider that Macbeth felt invincible – because of the witches’ prediction that “none of woman born shall harm” him – up until his last adversary reveals “tell thee, Macduff was from his mother’s womb untimely ripped.” Macbeth’s knees begin to buckle, he loses his confidence, which leads to his demise.

Going from philosophy to psychology, for killing in wartime, Macbeth was hailed as a hero. For killing in peacetime, he was condemned as a villain. Did one type of killing predispose him to the other? He might even meet criteria for a post-traumatic stress disorder diagnosis as outlined by the American Psychiatric Association’s “Diagnostic and Statistical Manual of Mental Disorders.”

On the political side of the critique, it’s worth mentioning the play’s portrayal of King Duncan as a benevolent despot and of King Macbeth as a malevolent despot. While it’s safe to say that Macbeth took it to the extreme by going on a rampage, Duncan is no saint either by way of being the top enforcer of a system based on the subjugation of the peasants at the hands of the aristocracy.

Faced with a cast of just six, director Svoboda had to scramble to adapt a play with over 40 characters, as stated earlier. How did he accomplish this? He deleted various scenes, which reduced his personnel needs. He merged three murderers (Banquo’s) into one. He made an actress play male roles and two actors play female roles. In spite of all this creativity, peripheral characters such as Donalbain, Fleance and both Siwards (Sr. and Jr.) were still missing.

Fortunately, the foursome were up to the challenge, showcasing their versatility on the stage. All in all, the absence of some scenes didn’t detract from making Shakespeare’s key points. The play appears to flow seamlessly with bagpipe music being aired between the scenes that were left from the original script.

“All the world’s a stage” was one of Shakespeare’s mottos, and it came true in the southern neighborhood of Syracuse.

— Review by Miguel Balbuena, Community Correspondent for The Stand