A senior-lead cast at Corcoran High School put on their final musical with “Bye Bye Birdie” Friday and Saturday night in the Corcoran Auditorium. Anywhere from 100 to 150 people were in attendance opening night according to Mrs. Liles, the ticket keeper.

“Bye Bye Birdie”is a 1960 musical that circulates around a famous musical sensation, Conrad Birdie, who is drafted into the Army. His management arranges for him to sing his “One Last Kiss” and deliver a kiss to a lucky girl from his fan club before departing. The events leading up to his “one last kiss” sets about a headache of events for his manager, for a family in Sweet Apple, Ohio and mourning in the hearts of teenage girls everywhere. 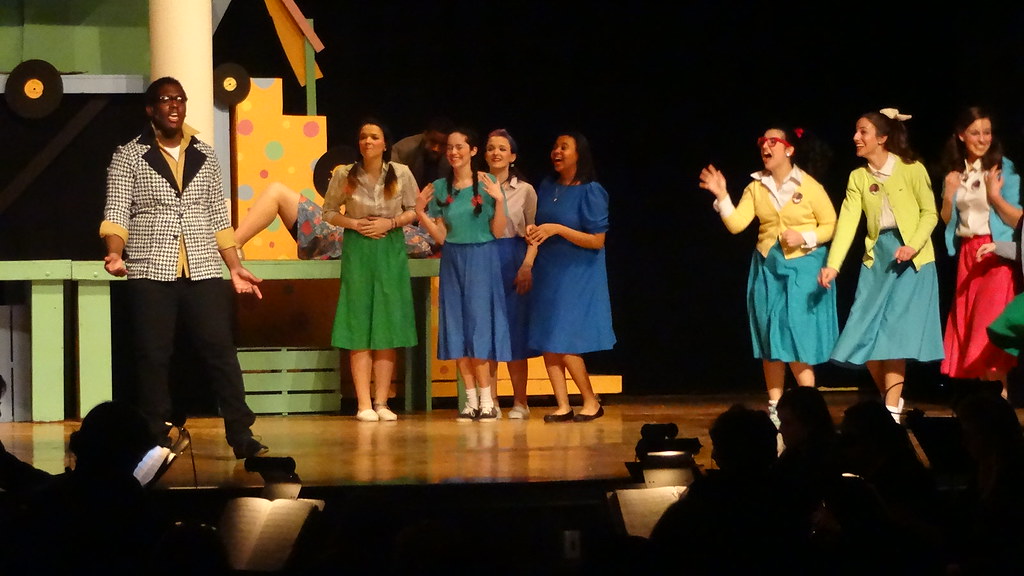 Opening the play and connecting the scenes and set changes is the Corcoran orchestra led by Priscilla Babilonia. Even the orchestra, however, couldn’t drown the energetic teen ensemble of girls in Conrad Birdie’s fan club singing “Oh We Love Conrad, Oh Yes We Do.”
With smart choices for set design, the play lays down a solid plot as junior Majestic Ross plays a very convincing shy, and spineless Albert Peterson — a son victimized by his inability to stand up to his overbearing mother to defend his long-time unacknowledged girlfriend Rose Alvarez.

While characters such as Kim MacAfee and Rose grew in role and music, Mrs. Mae Peterson, Italian-mother accent and all, carried a hilarious and confident buoyancy from the very top of the show to her solo toward the end. 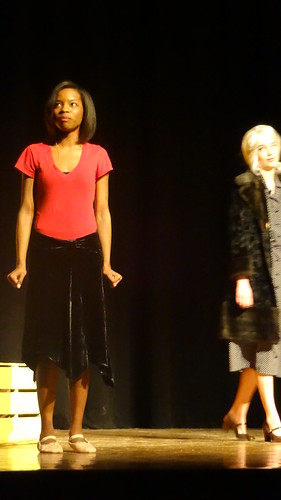 As Alissa’s (Mrs. Mae Peterson) final performance as a Corcoran senior, her bio reads a big “thank you” to those who helped her “…realize she wasn’t made to stand back and watch.” Her every entrance and her chemistry with son Albert and quick quips at Rose stood out in a non-high school musical manner. She was funny and committed.

The supporting cast of screaming, singing teenage girls and cut-throat reporters as sophomores and juniors were great detail. Who else can play a screaming teenager better than, well… a screaming teenager? Not to mention Hugo Peabody’s small but super well-delivered role as annoying boyfriend to Kim MacAfee.

The ensembles lively reactions are more than believable. Even when the lead lines don’t punch through, the ensemble’s energy and reaction is a cheer-grinner.

Though the scenes did seem to slow up toward the build-up of the “Ed Sullivan Show,” we can thank the elaborateness of the sets for Penn Station and the full cast of singing and choreography on stage for getting us over the bridge. The choreography was fairly basic. With the exception of Rose’s gutsy but risqué dance solo near the end, choreography would have been a chart-topping addition for roles like Conrad’s.

Two more surprising show stealers were the MacAfee parents played by Tyron McIntyre and Tylah Worrell. It’s a shame that a bio and photo are missing for these two roles. The previously reserved papa MacAfee seemed a bit in tune with Albert’s temperament of a shy people-pleaser until we see him grow fed-up with the Elvis-sized rock star, Conrad Birdie. Mr MacAfee began to be the affection of laughs as we see Conrad taking over his life, home, and eventually breakfast! Mr. MacAfee and his fatherly delivery is a television kind-of-classic. His monologues always come across poignantly. His duet “Kids” with wife Mrs. MacAfee is probably the best duet of the show, and his resolves toward the end only grow in fearless humor. 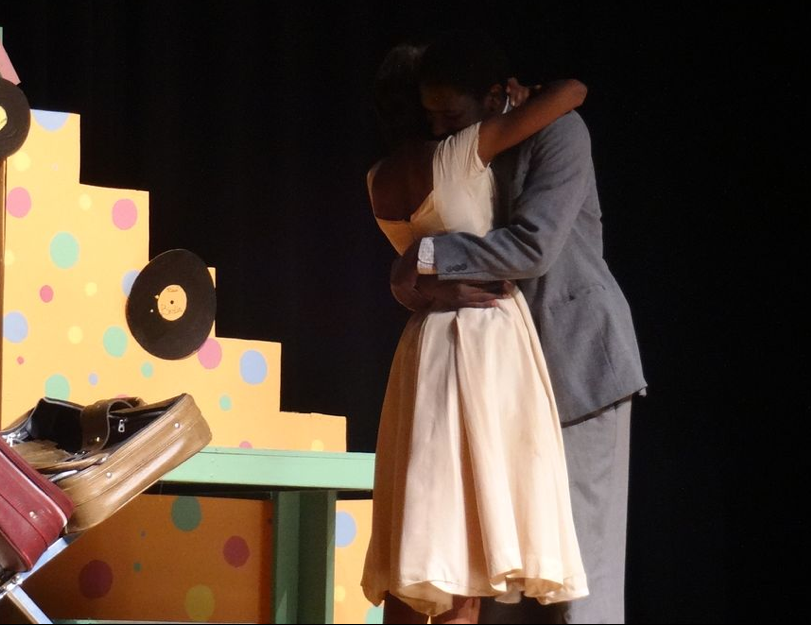 The low-register of the music, in comparison to the high register voices in the cast, must have been a tough tackle for these juniors and seniors. For instance together, Rose and Kim’s duet doesn’t find a solid balance on opening night but apart their solos are strong and show tons of character.

With all the singing that Rose has to do in Act Two, it is a pleasure to see an alto take on this lead. Destany (Rose Alvarez), post intermission, is one word: a professional actress. She goes after every dance, solo and scene like it’s her last audition.

Again, mother Peterson belongs in a Syracuse Stage play. Her level of commitment to a character as a high school student speaks volumes to the work being done by Mr. Greg Hipius and his team at Corcoran.

“What’s really cool about this group is that so much of what you see is all them. They take so much ownership in the process and the rehearsal,” said Hipius after opening night.

“I’m very proud and think they did a wonderful job,” he added. 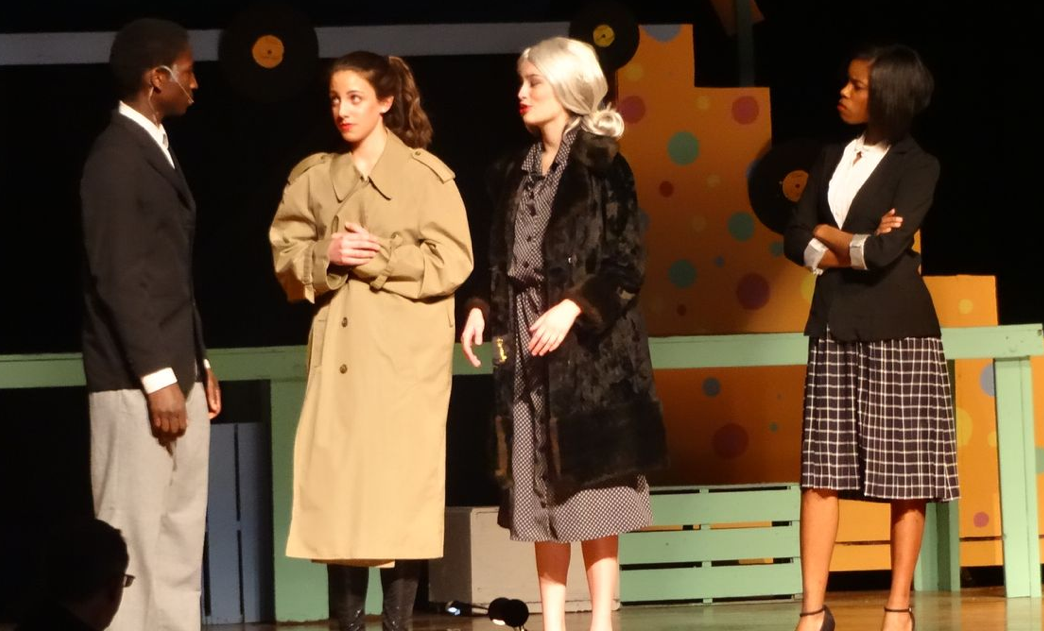 Performers from the cast of Corcoran's producation of "Bye Bye Birdie."

During intermission, Emily Streissguth stepped out of the orchestra and asked parents to tweet or write to Governor Cuomo requesting fair funding for Syracuse City School District and its programs. SCSD is among the three largest school districts in the state of New York. To see productions like “Bye Bye Birdie” launch successful careers in the arts requires more than just funding from the state. It calls for a much bigger audience effort on the part of families and local businesses, a city more in support of the arts and funding to teach the arts, not just to put on productions.

— Photos and review by Ruthnie Angrand, The Stand community correspondent