The critically acclaimed one-woman play “No Child” opened for its first public performance on Saturday, Sept. 25, at Syracuse Stage. It was a special performance for educators and people interested in arts education. Following the matinee show in the intimate Storch Theatre, audience members were invited to participate in a wrap-up discussion, where numerous Syracuse educators in attendance discussed the relevance of the play and its relation to the current state of the education system. 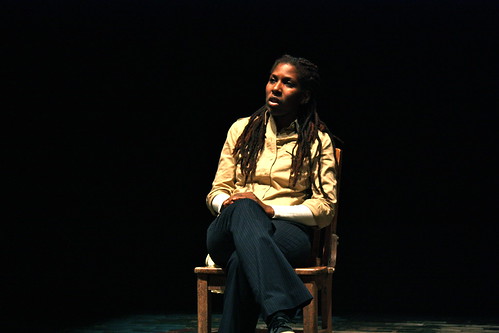 Directed by Timothy Bond and written by Nilaja Sun, “No Child” is a 75-minute play that chronicles a young artist’s experience as she tries to engage a class of troubled 10th graders to put on a play at a Bronx high school. The entire play is performed by Rochester native Reenah L. Golden, who artfully transitions between 16 distinct characters, ranging from an elderly school janitor to a diverse classroom of teenage students.

“No Child” provides a sobering and realistic look at the difficulty teachers’ face in an impoverished school district and classroom, while also providing a sense of hope through the journey all the characters take. In an effort to localize the themes in the play, the show opened with a video sequence that featured images of local schools, such as Nottingham High School and Hillside Children’s Center.

For the post-show wrap up, the moderators asked the audience for responses and feedback. The moderators were Jeffery Mangram, assistant professor at Syracuse University in the education department; Lauren Unbekant, director of educational outreach for Syracuse Stage and adjunct faculty in the drama department at SU; Jack Langerak, co-producer of Rochester-based Ad-Hoc Productions, and Golden, the star of the show. 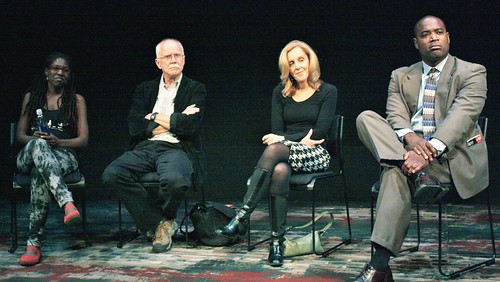 Many of the educators in attendance discussed their understanding of the hardship and frustration that the main character experienced in the play while trying to get through to her students. One teacher in the audience who works five miles from the theater, who preferred not to name the school, said she had all the students in the play in her classroom last year.

Other Syracuse educators expressed their hope and desire to continue to engage their students but the difficulty they face due to the larger class sizes.

The lively discussion led Mangram to discuss ways for the school system to improve, including getting a better handle on how students learn and more clearly setting goals for what the school expects from teachers, administrators and even parents.

To further facilitate educational outreach, Syracuse Stage has reserved six of the eight matinee performances for students in the Syracuse City School District. Entire classes of students come with their school to watch the play, according to Langerak. After the show, the high school students also have the opportunity to work in the classroom with the education department of Syracuse Stage to create a cast of characters that represents their own school.

Langerak said a recent group of student attendees said they easily identify with the students characterized in the play. The kids immediately jump on the parallel of being a prisoner when they see the play, explained Golden, such as the metal detectors that are in place at their schools.

“No Child” is a timely piece that engages the audience to think critically about the current climate of the school system, while also showing the power that one educator can have on a student’s life. The play runs until Oct. 10 at Syracuse Stage.