If you walked into the doors of the Sitrus at the Sheraton Hotel on Friday, Feb. 3, it would be difficult not to notice Mike and Sharon Colabufo, a couple in their 60s, dancing to the live performance of the CNY Jazz Trio featuring Lorenzo. The audience was intent as their eyes bounced between the couple and the jazz musicians.

As the Colabufos pivoted and swirled to the tunes of the evening, keyboard player Jonathan Le Roy expressed his enthusiasm for the couple that just couldn’t settle for sitting in the audience. 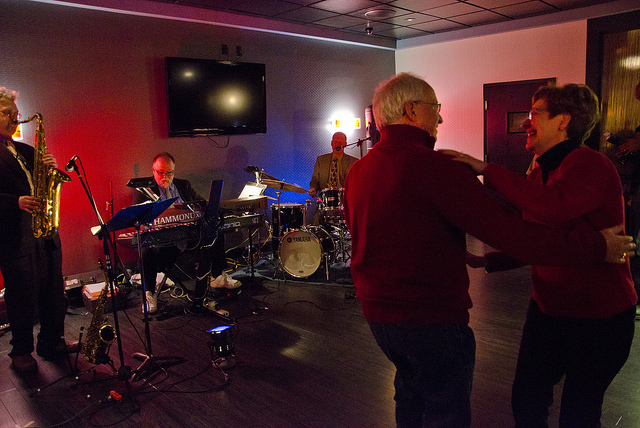 Mike and Sharon Colabufo dance the night away. --Photo by Amanda Marzullo

“We always forget that jazz was originally popular dance music,” Le Roy said. “It’s always cool watching someone that actually gets into what you’re doing.”

The Colabufos said they came to Sitrus to support the CNY Jazz Arts Foundation. The dance moves, they said, were a product of a hobby they picked up nine years ago. They said they decided to take dance lessons when they learned their son was getting married. Mike said jokingly that he was ready to sign the divorce papers after his wife asked him to accompany her to a dance class. Now, they can’t stop moving. When asked what made them want to dance in a room where no one else was dancing, Sharon said that music gives them the push to just let go.

“A lot of people don’t want to put themselves out there for fear that people will laugh at them, but when the music moves you, you can’t sit still,” Sharon said.

Luckily for the Colabufos, they won’t have to sit still, or at least not on Friday nights. The Sitrus Lounge has teamed up with CNY Jazz to bring the music genre to Sitrus two Fridays out of every month. The monthly schedule can be found on the CNYJazz website.

Larry Luttinger, also known as “Lorenzo,” founded CNY Jazz in 1996. Luttinger said the organization, which started out as the CNY Jazz Orchestra, expanded to include numerous programs. Jazz@Sitrus is one of the organization’s newer developments.

For Mike and Sharon the deal of the night was the opportunity to swing, move and let the music take control.