The South Side welcomes the Christmas season with a celebration

This time of year, the PEACE Southside Family Resource Center Inc., is not just about programs. It’s about presents.

But this year the center also has plans for its second annual Christmas celebration, which staff members say made a lasting impression on children and families who attended the event last year.

Lori Covington, coordinator at the Southside Family Resource Center, said she feels that the South Side has slowly been losing its holiday tradition over the years, and with it a sense of togetherness and community. 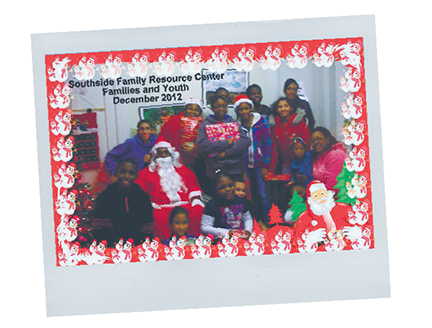 “I don’t see anything other than the annual tree lighting exhibit around here anymore,” Covington said. “We used to have the Sears Christmas decorations right around the corner, which were extremely popular in the ’60s and ’70s. You can still see remnants of where the auxiliary store used to be. People would come from all over the city and even outside the city to see the Sears Christmas.”

Covington believes holiday traditions have more of an affect on children than people think, which is why her Christmas event has become so important to her and the staff. She says that for children, seeing Santa Claus, decorating the tree and opening gifts instills hope.

“That’s what this generation is missing, that spirit,” Covington said. “They used to make the South Side feel like you were at the North Pole. We used to have Cooper Decorations where Coyne used to be. The whole corner used to be lit up with holiday spirit. Within the last three decades you don’t see the spirit we grew up with.”

Michelle Coss, 25, a family support assistant with Project Connection, says because Christmas traditions have dwindled and many families cannot afford the holiday decorations and festivities, the center’s holiday event is even more important.

“My favorite part was opening the presents,” said Tatjyana Verhage, 11, a child who is registered in the center’s after-school care program. “All of my friends had so much fun, and we’re all really excited for it this year. Christmas is my favorite holiday.”

Children were able to sit with Santa and have their photo taken with him. As the photos were being taken, many of the parents wanted to join. For three of the families, it was their only family photo ever.

Covington says that the parents who accompanied their children had just as much fun.

“Parents will bring their family photo with Santa in and show it to me, telling me they still have it and that they’ve framed it,” Covington said. “It’s so nice to see, and it’s heartwarming to know just a photo could have such an effect on them.”

Aldean Williams, 58, attended with her three grandchildren — two boys ages 5 and 13, and one girl age 7. She says the event allowed families to embrace the holiday spirit without stress or worry.

“Everyone was overjoyed to be there, and their happiness showed that the event gave them something they had been missing,” Williams said. “Many of these kids don’t get to experience decorating a Christmas tree or getting a present. It let them see the holidays in a new light.”

“Every family deserves to enjoy the holiday season,” she said. “We just want to keep making that possible.” 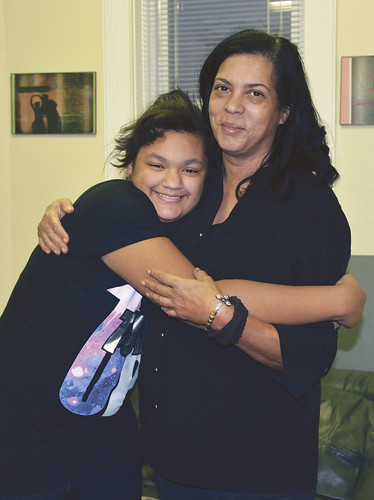 Lori Covington, of the PEACE Southside Family Resource Center, hugs Tatjyana Verhage, 11, who is in the center’s after-school care program. Covington is coordinator at the center. | Shannon Rosenberg, Staff Photo

Covington says events like this help with image and reputation.

“We are about our families, our community,” Covington said. “There are so many people in this community that have done so much here. You never see or hear about them. But let there be one incident of negativity (and) it’s in the news.”

The PEACE center looks at the event as an opportunity to give back to the children and to support family values.

“Parents are so busy nowadays and because it’s a tough economy people are working extra hard to support their families,” Coss said. “They don’t have time or money to prepare for the holidays.”

Covington and the staff members are expecting an even bigger crowd this year and they will be promoting the event to the community by putting out fliers.

The event is being planned for the week before Christmas, although a date had not been set when this issue of The Stand went to print.

No one is more excited than the children.

“The kids have already been asking around and trying to find out more information about it,” Coss said.

“While they may think they have a good idea of what’s going to happen, Lori loves to throw surprises in.”

Covington says the expression on the children’s faces as they unwrap their presents is the same expression she saw on people’s faces when she stood outside the White House for President Obama’s inauguration — hope.