Sept. 4, 2012 marked the 125th anniversary of the Syracuse Rescue Mission and its commitment to helping community members in need. As part of a string of celebrations, this morning the Rescue Mission held a prayer breakfast for various members, volunteers and donors—along with pastors and other church figures from neighboring religious institutions that have maintained active roles with the Rescue Mission. 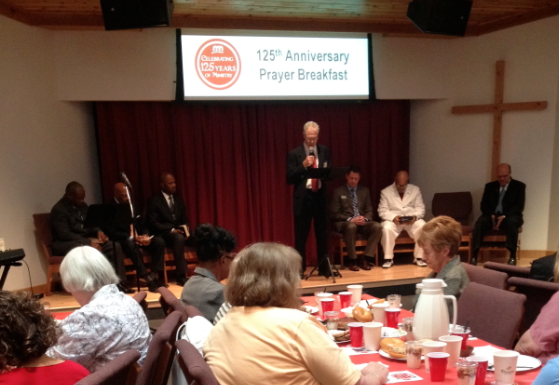 Founded in 1887, the Rescue Mission serves the poor and homeless of Syracuse in hopes of not only aiding them—but guiding them with the idea that, “…a personal relationship with God is the basis for real life change,” as noted on the Rescue Mission web site. They also have extended their efforts in neighboring towns of Binghamton and Auburn.

Executive Director and CEO of the Rescue Mission, Alan Thornton, finds that the prayer breakfast is just a small way of saying thanks to the so many who have helped make the Rescue Mission as integral as it is in the community.

Thornton, who has been with the Rescue Mission for 18 years, says that despite how long the center has been open, they have successfully continued to uphold and maintain their core values.

“The cause still remains the same today, to help out those in need,” Thornton said during his opening remarks at the breakfast.

A staple in the South Side community, the Rescue Mission is consistently devoted in helping to create programs and events that can produce in even the smallest measure ease on an individual, or family, that may be suffering through these difficult economic times. 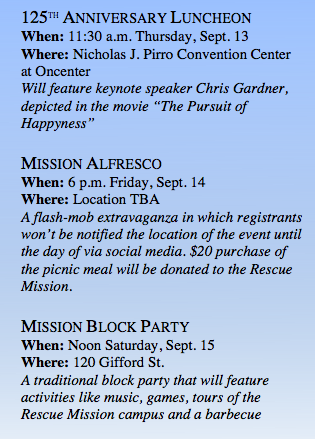 “We not only help those in need find different types of services, but more importantly we help them regain their independence,” Thornton said.

The Rescue Mission offers a plethora of services to those that are in need of assistance and guidance.

In 2011, according to its website, the organization served more than 224,637 meals to those that were in need. It also offers such aid as used clothing, homeless van transports, employment-finding assistance and both short-, and long-term residences.

A majority of these services are made possible with the continuous support of at least a dozen nearby churches that also preserve some of the fundamental foundations the Rescue Mission created so long ago. It is this network that has helped so many underprivileged Syracuse residents learn and become familiar with the Rescue Mission.

“Word-of-mouth,” Thornton says when asked what the most effective way the Rescue Mission has found residents in need. He added that a good majority of that is possible through a system like churches—where the homeless and those in need will often look to first.

A handful of churches were represented at the more than 50-attendee breakfast held on the morning of Tuesday, Sept. 4, with several of the church figures contributing remarks and prayers.

With the audience enjoying an assortment of breakfast foods, attendees would bow their heads as every speech either ended or began with a prayer. During a couple moments of the celebration, some pastors became so moved that they briefly took a pause during their sermons to regain their composure.

Rhonda Draper, a current volunteer and future board member, affirms that such emotion speaks volumes as to the type of organization the Rescue Mission is. She has found that the community is so devoted to the Rescue Mission because of the warmth and care it offers.

“Come see love in action,” Draper said when asked to describe the center.

The prayer breakfast is just the beginning of what is a nearly two-week celebration of different events and activities to commemorate the impact and significance the Rescue Mission has had in Syracuse.

There are three more events next week that include a block party, flash-mob picnic and luncheon featuring guest speaker Chris Gardner. Gardner was the source of inspiration for the 2006 blockbuster “The Pursuit of Happyness,” in which Will Smith portrayed his early struggles of being homeless to a successful broker through the help of similar organizations as the Rescue Mission.

While Gardner’s story is unique, Thornton recalls a recent incident of a similar nature that helps to continue the legacy the Rescue Mission is constantly working to inspire.

“A man we used to help, and who has now found success, came the other day and offered to give his extra state fair tickets away,” Thornton said. “He didn’t have to, but the fact that he thought of us rather than throwing it away really says something about what we do here.”

Thornton notes that even though it’s a daily commitment, he can’t help but be proud of the various successes the center has accomplished.

“We have changed lives,” Thornton said. “We’re helping improve our community every day.” 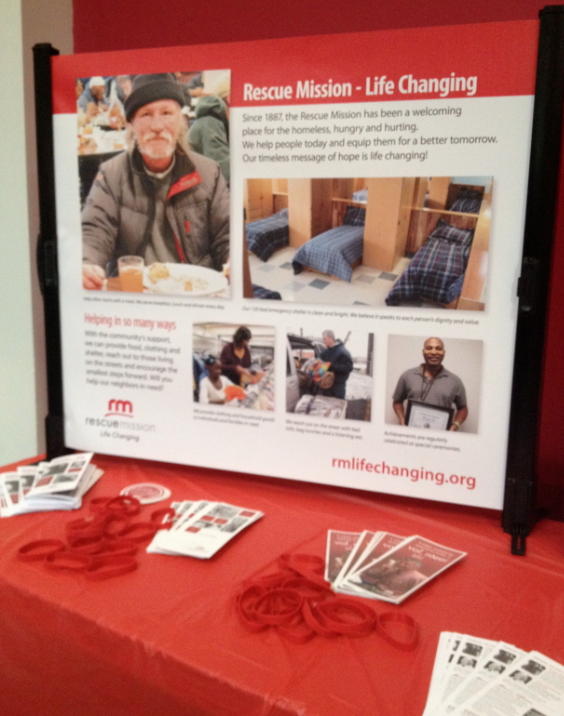