Scores of photographs providing a visual retrospective of African-American life in Central New York, titled, “Black Syracuse & Beyond,” will be on display to the public at Syracuse University’s Schine Student Center through March 3.

The pictures, taken by South Side resident Richard Breland, illustrate the people, businesses and community life of the city’s African-American neighborhoods, including the long-defunct 15th Ward.

Breland said his photographs, which span the decades from 1950 to today, spoke for themselves. “There are so many stories about the old 15th Ward in these pictures,” Breland said during the exhibit’s opening reception. “They’re better than any words I have.”

Urban renewal projects, including new housing developments and the elevated Interstate 81 highway, demolished the 15th Ward, which roughly stretched from Erie Boulevard to East Adams Street. Many African-American families moved to the city’s South Side.

Some highlights of Breland’s collection are 60-year-old photos of such long-ago businesses as Althea’s Chicken Inn, Dorsey’s Backyard Car Wash and an image of the vacated A.M.E. Zion Church. A black-and-white image of the Breland siblings playing on the steps of Hopps Church is a centerpiece of the exhibit.

“All of this was just little, old me with a little, old camera,” Breland said. He began taking pictures when he was 9 years old. He saved his money for months to buy a Brownie camera, the cheapest he could find.

Joan Bryant, a professor of African-American studies at SU and the exhibit’s curator, said she selected Breland for the exhibit because of his many years in Syracuse and knowledge of the community.

“Richard and his collection are a treasure trove for people interested in a visual narrative of black life in Syracuse,” Bryant said. “His photos are a striking piece of history.” 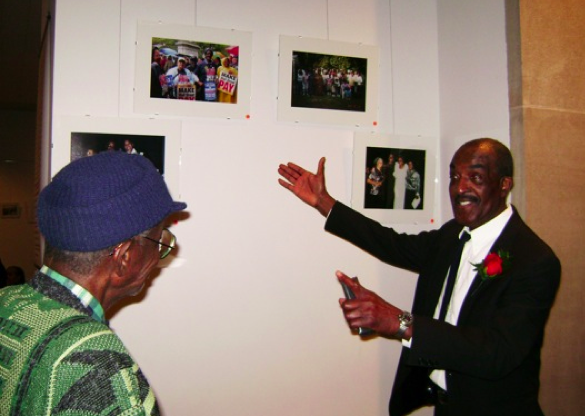 Breland served a tour of duty in the Korean War before returning to Syracuse for college. He graduated with a business administration degree from Central City Business Institute. After graduation, Breland worked as a janitor at General Electric in Syracuse. Seven years later, the company promoted Breland to accountant, making him one of the first employees to climb from janitor to a white-collar job.

“I didn’t think anything of it at the time,” Breland said of his photo hobby. “It’s an incredible collection of life as we knew it then. It shows that even as life changes, it’s the littlest things that become memorable.”

Those memories, captured in the photos, seemed to come to life during an opening reception that resembled a backyard barbecue more than an art gallery. Family and friends huddled around Breland as he meandered from photo to photo, sharing stories and jokes as he walked. Through handshakes, hugs and slaps on the back, Breland brought to life the memories his photos had frozen in time decades ago.

Clifford Breland, Breland’s brother, helped Breland name many of the photos. “There’s a lot of reminiscing here tonight,” he said. “All these pictures and people bring back some of my favorite memories of growing up.”

Jack Howland, an East Syracuse resident, was among the first visitors to the exhibit. Howland has known Breland for about 15 years and considers him a close friend. “The photo of Richard in the drum and bugle corps is about the cutest thing I’ve ever seen,” Howland said, referring to a 1948 photograph of Breland and his brother, William, dressed in marching band uniforms as part of the Dunbar Drum and Bugle Corps.

Kay Howland, Howland’s wife, said she spent more than an hour reading the detailed descriptions and analysis of Breland’s photos. “These show us a side of him we’ve heard of but never seen before,” she said. “He’s had so many incredible experiences in his life.”

Breland’s photo exhibit is one part of a larger project, also led by Bryant. The Black Syracuse Community History and Mapping Project is an expansive collection of photographs and oral history interviews designed to showcase the history of African-American life in Central New York.

SU funded the project through a $25,500 seed grant, said Kathy Zubal-Strang, director of administration for SU’s College of Arts and Sciences. An organization receives a seed grant for the early stages of data collection and research, with the goal of producing something of “digital and cultural understanding,” Zubal-Strang said. Richard Breland’s photo exhibit is one outcome of the Black Syracuse Project.

“We call it a seed grant, because it’s as if we plant a seed and hope it grows into something worthwhile,” Zubal-Strang said.

At the exhibit’s opening reception, visitors found greater significance in Breland’s photos. Raoul Lafayette Breland, South Side resident and Richard’s nephew, said the collection could bring community members together. “This can solidify the ties that bind and give us a real sense of community,” he said.

Added Lafayette Breland: “It’s very profound. Not only for the black community, but so everyone can see how rich Syracuse really is.”