On the first day of Black History Month, artist Arthur Brangman encouraged others to quell their anger over the historical treatment of black America.

“I feel the worst enemy you can have on Earth is found in the dark corners of your own mind,” he said.

To help begin that process of closure, Brangman said, he created a series of paintings depicting the history and perseverance of the African people as they were transported to America as slaves. The collection, titled “Precious Cargo: An Artistic Exploration of Black History Reception,” is now on display at the Beauchamp Branch Library throughout February. 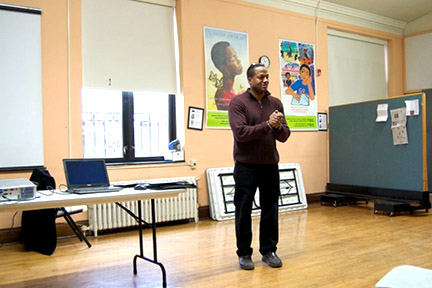 Syracuse-based artist Arthur Brangman talks to attendees of his presentation on his art collection, "Precious Cargo," during the exhibit's opening reception held Feb. 1.

The series’ opening day is the first of several events the library is hosting to celebrate Black History Month.

Paschal Ugoji, a librarian at Beauchamp and native Nigerian, said the library has hosted Brangman in the past. Not only do residents enjoy him, Ugoji said, but his portrayals of African heritage connect with the themes behind Black History Month.

“The sky is the limit of everybody,” Ugoji said about his definition of black history. “This is the American Dream. Let go of the past and move ahead and be able to catch up with all of the cultural and ethnic groups within the country. And celebrate and be happy.”

To a crowd of about 15 people, Brangman introduced “Precious Cargo” and explained the meaning behind each painting in the collection. This series, he said, is meant to take an enlightened approach to the African Diaspora so the healing behind the hatred can begin.

Self-knowledge is an important theme in his work, Brangman said. For people to have self-esteem, he said, they need to do research. Brangman himself has looked into 17th-century West African culture and its people.

“This is something that we as African Americans can learn to help us become resilient and overcome that anger,” he said.

Brangman uses this research in his artwork, such as with depictions of African tribe leaders and the “sankofa” symbol. The “sankofa” symbol represents learning from one’s past. In one painting, it appears above a group of Africans with faces of determination.

In his depiction of Harriet Tubman, Brangman said he superimposed her face over a map of New York, then singed the edges of her to represent her “trailblazing” actions as a leader of the Underground Railroad. 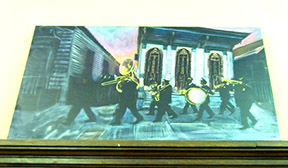 "When the Saints go Marching In"

In other paintings, such as “When the Saints Go Marching in,” Brangman includes images of slave ships. He said they symbolize the journey of the African people.

“I look at each slave ship as precious cargo,” he said. Even President Barack Obama, who Brangman painted just after Obama was elected, is considered precious cargo, he said.

Jacque Kofi, an attendee of the event, said he appreciated Brangman’s use of historical context. He connected particularly with the “sankofa” symbol and the spirit behind it, he said. For him, that symbol, in addition to the one of slave ships, brought the reality of African history to the present day.

Mousse Sengare, a Syracuse resident for eight years, is from the Ivory Coast. She said she knows a lot about her two backgrounds, but younger generations often do not. 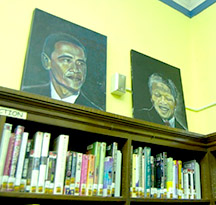 Brangman's portrait of President Barack Obama and his unfinished piece of Nelson Mandela are on display at Beauchamp Branch Library.

It is why she said her favorite painting is “Doorway of No Return.” Brangman said it represents the African people leaving their country for America.

“It’s true,” said Sengare about the piece. When Africans came to America, some of them lost their culture, she said. Now, younger generations don’t know as much about Africa anymore.

Brangman spoke to this sentiment at the end of his presentation.

Brangman’s art is on exhibit throughout February at Beauchamp Branch Library located at 2111 S. Salina St.

— Article and photos by Maddy Berner, reporting student at the S.I. Newhouse School of Public Communications