The former home of the New Jerusalem Church of God in Christ was victim to two typical Central New York realities — brutal weather and even harsher budgets. The old building at 1641 S. Salina St. is dusted with fluffy snow, decorating a steeple that’s been looking over the South Side since 1884. But that same snow threatens to collapse the steeple, and icicles gathering under the rafters look ready to pull the building to the ground. Loose bricks litter the front bushes.

That disrepair, and fears of what the weather might do to the structure this winter, led the city of Syracuse to issue The Rev. James Jones and his congregation an ultimatum — either order the repairs necessary to make the building safe for public use, or leave.

Estimates for building costs and repairs were far more than the 30-family congregation could handle. The church has been run by Jones’ family for almost 40 years. His father, The Rev. Thornton Jones, converted a former youth center (which had previously been the Danforth Congregational Church) into the newly christened New Jerusalem Church of God in Christ parish in 1972, and served the congregation there until he passed away in 1992. Then, it was James’ turn to take over. 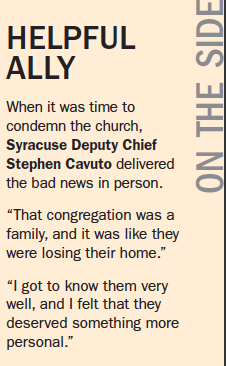 Now, they’re searching for a place to lay down roots and start over again. In the meantime, members have been meeting in the lower level of the Prince of Peace Missionary Baptist Church at 317 E. Jefferson St. Jones is optimistic.

“I believe that God has a plan for us, and we’re going to find out what that is soon,” he said. “It’s just a matter of discovering that path.”

In the late 1990s, bills started to mount and the structure began to disintegrate. Warming the church alone could cost as much as $2,000 to $2,500 a month during the winter, and the sanctuary, the roof, a gym and classroom were falling into disrepair, he added.

The police and fire department couldn’t ignore the hazards any longer. When the building didn’t pass inspection in October, as predicted, it was time to go.

“We had tried to raise money through grants before, but we couldn’t accumulate the massive amount of money that we needed. We accept that we have to leave, and we’re going to start over,” Jones said.

Jones describes how he felt about having to leave.

“It wasn’t a shock, no,” Jones said. “It was more just a resignation.”