Inspired by Olivia on ‘Law & Order,’ Fowler senior plans to become a detective

Brianna Vassar sat in the front row during the 14th annual South Side Christmas Tree Lighting held Monday, Dec. 5, 2011, in anticipation. The Fowler High School senior waited for her name to be called, and then she graced the stage at the Beauchamp Branch Library as the 2011 Charles Dozier III Memorial Scholarship recipient.

“I’m very, very proud of Brianna,” her mother, Debbie Ryan, said after the ceremony. “I read her essay and thought it was really good and am just so proud that she was chosen out of all the high schools.” 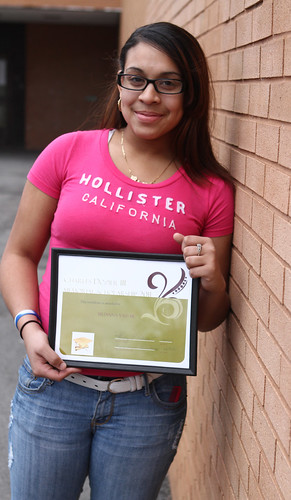 Brianna Vassar, a senior at Fowler High School, will attend college in the fall and wants to use her education to give back to the community. --Photo by Glorianna Picini

The $500 scholarship, which recognizes a Syracuse city high school student, was created in honor of Charles Dozier III, a South Side businessman who believed in community outreach, especially during the holiday season.

The application required two letters of recom- mendation, consistent passing grades and a three-page essay asking applicants how they would use their education to give back to the community.

Vassar said the answer was easy.

“I want to go to college and become a homicide detective because I want to stop crime from happening in our community,” the teen said. “I started watching ‘Law & Order,’ and Olivia Benson (played by Mariska Hargitay) became my inspiration.”

Vassar has seen what violence can do.

“Someone really close to me was shot and killed, and there was no justice for them, and I want to change that,” she said.

Vassar will attend Herkimer County Community College in the fall to study criminal justice and is excited about her future prospects. But she acknowledges that the path to her future was not always so bright.

“I wanted to give up,” she said. “In 10th and 11th grades, I really wasn’t into school. But thanks to Ms. (Susan) Henry and Ms. (Jamie) Gartner, they helped me with my college applications and got me back on track.”

Today Vassar is a thriving senior who is active within her community. For the past three years, she has been a member of the Community Wide Dialogue to End Racism, which meets five to six times a year to discuss the stereotypes that exist and how to end racial inequal- ity. She also plays basketball, volleyball and softball.

Adam Lutwin, a Fowler High School English teacher, has taught Vassar for the past two years and is proud of her accomplishments.

“She’s only 17 and has already dealt with some difficult issues, but she’s also changing her own direction and pushing towards the next level,” he said. Lutwin described Vassar as a passionate, mature and heavily involved individual who is highly capable.

“She’s very popular in school but is also a very good student and can balance both worlds quite well,” he added.

Vassar hopes she can be a good example for youth in her community and that someday she can give back through her love of criminal justice.

“I think it’s important to never give up and to fight for what you want in life,” she said. “I feel strongly about getting justice for victims, and I want to help my community.”