The program, Parent University, is a series of workshops for parents of elementary, middle and high school students — intended to teach mothers and fathers how to better support their children’s education, Contreras said. 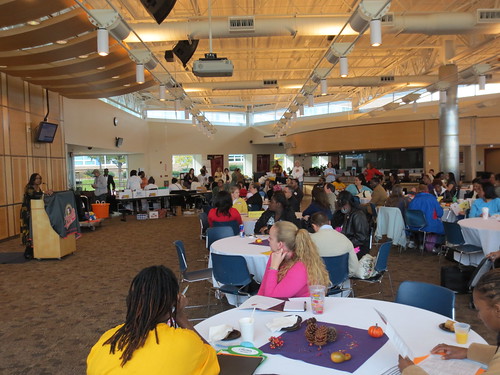 The superintendent, inaugurating the program at a “kickoff summit” at Onondaga Community College, told the crowd that when the Syracuse City School District Board of Education hired her a year and a half ago, she spoke to residents at churches and backyard barbecues. Her mission was to hear what parents needed to better support their children. She said she got the idea for Parent University from a similar program run by a school system in Philadelphia.

“Classes available include things dealing with bullying,” said Kathleen Sims, communications specialist for the district. “There’s stuff on how to talk to your kids. There’s stuff about Say Yes to Education, understanding exactly what the program is.

There’s a wide variety of different things available to our parents, and the superintendent feels it’s really important because it’s a way to keep our parents engaged and get them engaged.”

Monique Wright-Williams, executive director of parent and family engagement for the school district, said she chose classes that would be useful to parents. “I surveyed family and district staff my first few months on the job and, based on the feedback from the parents and the administration here, we devised some topics that we thought would really be beneficial,” she said.

The district paired with Say Yes to Education to kick off the program Oct. 20 at Onondaga Community College. Parents were invited to attend a day of inaugural seminars. When registration began at 9 a.m., a line of parents stretched out of the glass doors of the Gordon Student Center. Yellow buses shuttled parents and their young children to the center from various schools in the district and locations in the city.

Once parents registered, they received folders filled with brochures, schedules and information, all on brightly colored sheets of paper. They then entered the main room of the student center, radiant with morning sunlight that streamed through a wall made up entirely of glass panels. On the other side of the room was a long table with a buffet breakfast, including large pitchers of orange juice and coffee as well as platters of breads. Children waiting to be taken to the YMCA on campus for the event explored the maze created by the rows of round tables. A little boy ran down an aisle smiling, carrying a muffin with a bite missing from the top.

One mother, Patricia Egbuson, went to the kickoff summit to learn how to help support her daughter, a 10th-grader at Henninger High School who receives special help. “I’m here to get some information on empowering my daughter for success,” Egbuson said.

The day was split into three sections, with each parent registered for three workshops throughout the day.

Nina Freeman, a mother of a fifth-grade boy at HW Smith K-8 School, said she was excited to be at the kickoff of such an important program for parents. “It gets them more involved,” Freeman said. One of the classes she was signed up for was Raising a Son in the Absence of His Father. “It’s not really necessarily for me because my son’s father is always there. I just know other people, other women, who go through that,” Freeman said.

Superintendent Contreras addressed the crowd before the first seminars began, expressing her gratitude for parent participation in the program. Contreras, originally a high school English teacher in Illinois, worked her way up to chief academic officer in Clayton County Public Schools in Georgia, and then in the Providence Public School District in Rhode Island. Throughout her career, Contreras is credited with successfully expanding gifted programs and programs for struggling students. She graduated in 2010 from the Broad Superintendents Academy, a school that prepares leaders to head urban school districts. Contreras was appointed the superintendent of the Syracuse City School District in March 2011.

At the end of the kickoff event, parents gave feedback about the seminars. “The evaluations suggest they went really well,” Wright-Williams said. While the classes were filled with enthusiastic parents, Wright-Williams said she hopes more get involved. “I thought it was a good start to what we need to do but there’s still a lot of work that has to happen,” she said. “One hundred eighty-two is fantastic based on what we’ve ever gotten from parents, but certainly not nearly satisfactory.” 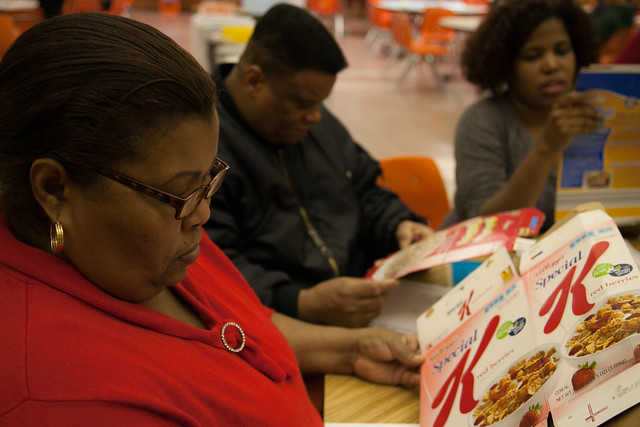 Argentina Rodriguez (in red) learns about counting calories and keeping fat content in mind at Salsa, Salud y Sabor. The class, which meets every Wednesday over an eight-week period, is sponsored by the YMCA and taught by Marisol Hernandez and Marina Rodriguez. Part of a series of seminars held by The Parent University, the class teaches parents about proper nutrition, serving size and the value of exercise in hopes that they can better educate their children. | Manuela Marin Salcedo, Staff Photo 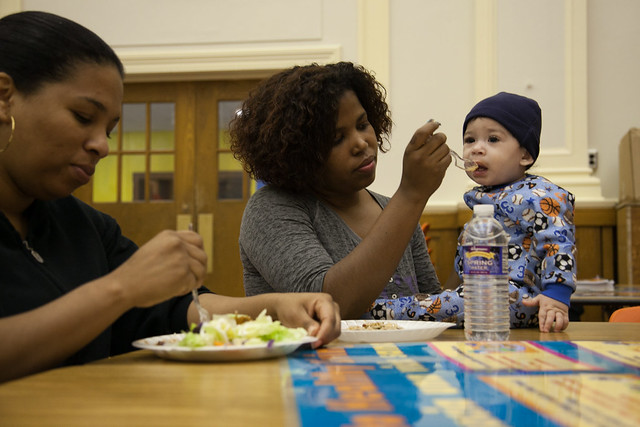 Herminia Marte feeds her nephew, Luis Flores, while enjoying a home-cooked meal with her sister, Martina Marte at Salsa, Salud y Sabor. Each week a different participant cooks for the group. This week their mother, Argentina Rodriguez, was in charge of cooking. The class, which meets every Wednesday over an eight-week period, is sponsored by the YMCA and taught by Marisol Hernandez and Marina Rodriguez. Part of a series of seminars held by The Parent University, the class teaches parents about proper nutrition, serving size and the value of exercise in hopes that they can better educate their children. | Manuela Marin Salcedo, Staff Photo