Luck of the Draw

The chances of winning are slim, but the payoff is handsome.

With the end of the academic school year upon them, parents of hope-to-be students at the Syracuse Southside Academy wait to see if their child will be selected to attend the school next year.

“I’m crossing my fingers and hopefully my son gets a spot,” said Rayna Shepherd, who is trying to get her fourth-grade son into the Academy.

The Syracuse Southside Academy is one of two Syracuse charter schools, and is located on Onondaga Creek Boulevard. Currently, 650 students in kindergarten through eighth grade are enrolled here. Syracuse’s other charter school, Syracuse Academy of Science, covers grades 7-12. 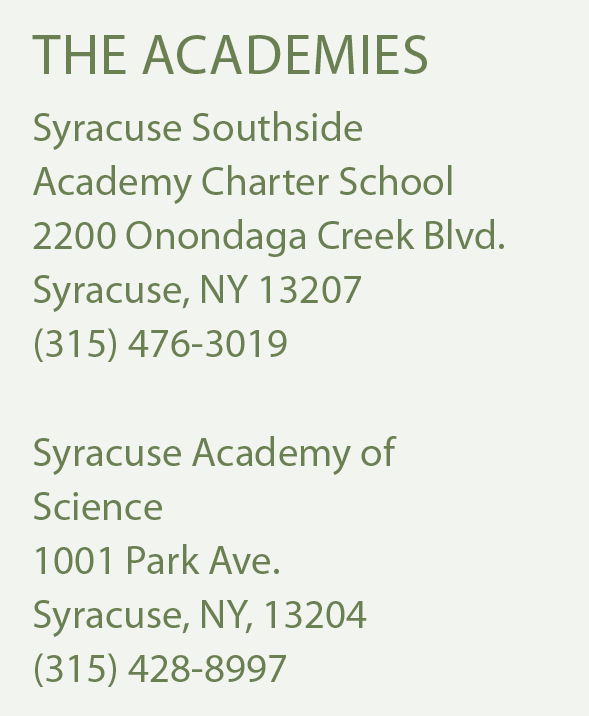 Charter schools are tuition-free, privately run public schools that don’t have to follow all of the same rules
and restrictions as city public schools. Syracuse Southside Academy is run by a for-profit organization called National Heritage Academies that operates more than 75 schools all over the country, including six in New York.

The popularity of these schools is rising quickly. There are more than 4,900 charter schools nationwide, serving nearly 2 million children, according to the U.S. Department of Education.

“I think charter schools are becoming so popular because it gives parents an alternative in-between the public school system, which sometimes isn’t great, and expensive private schools,” said Nicole Gill, who has a 10-year-old and an 8-year-old at Southside.

Gill, who was able to get one of her daughters into the Academy from the city schools, said Southside is really the only option besides Catholic school.

“The city schools just aren’t getting it done. You go in there and there’s kids running everywhere. A reason why this [Southside] school is so popular is because there’s nowhere else to go,” she said.

For Deohna Evans, the Syracuse Southside Academy was the best thing that could have happened to her sons. “It’s great. They have a good structured system and it’s really like a community here,” she said.

Donna Cooper, a South Side resident, said that after she did some research, she realized a charter school would be the best fit for her 11-year-old daughter.

“I knew that this school would be right for her. It has all the things my daughter needs to succeed, like a lot of support,” Cooper said.

Cooper’s daughter, Natally, said she loves being at Southside Academy.

“I really like it here because I get to learn a lot but also dressing up every day in uniform is kind of fun,” she said.

The Syracuse Southside Academy has a waitlist of more than 100 students, parents have been told. The Academy referred all questions to its national media office, National Heritage Academies, which did not respond to requests for information.

The waitlist process is a tedious one. First, a parent or guardian must go into the office and fill out an application, which is usually available in January. After their application is submitted, they wait until the lottery. This year, the lottery was held April 24.

The number of students picked depends on the space for each grade level, said Stephanie Irving, a grandmother and recently retired Syracuse police officer who has been through the process before. Once the application process is complete, parents or guardians are notified if their child has been chosen.

If they are not selected, they must reapply the following January and go through the whole process again. Applications do not carry over to the next lottery.

“It really is a pain. The process is very odd and it can get confusing at times,” Irving said.

Although charter schools are gaining increasing popularity, Irving said there are some negative repercussions to the schools.

“The Say Yes program and the tutoring programs aren’t available to us because we aren’t enrolled in city schools,” she said.

Any student that isn’t enrolled in a city public school has to pay for most things that usually come free to city residents, Evans said.

“I couldn’t send either of my sons to the summer enrichment camps through the city because if you aren’t enrolled in a city school, you can’t use most of the city’s resources,” she said.

The Syracuse Southside Academy was granted permission to continue operating by the New York State Department of Education at the end of 2009. The school had its charter approved through the 2014-2015 school year.