Wright, a longtime South Side resident, has suffered in the past decade the loss of both parents, a frightening bout with cancer and the heartache of seeing a neighborhood she loves deteriorate around her.

She decided last year she would finally pursue a formal education.

“Cynthia, like many of our students, has more to overcome than the average college student,” said Bill Eppel, coordinator of the Higher Education Opportunity Program at Syracuse University’s University College. “She is dedicated to getting to campus, working hard at home and fighting every step of the way.”

The Higher Education Opportunity Program at SU helps prospective students attend SU on a part-time basis when their financial and educational backgrounds would otherwise rule them out.

Wright, unmarried and without children, attends classes at University College two days a week, but said she goes to campus every day to study and keep up with her classmates. She is working toward her bachelor’s degree in Women’s and Gender Studies, with the goal of eventually achieving her doctoral degree.

“It is important to have good grades,” Wright said in an interview last spring. “But you have to have that extra drive. You have to really want to succeed or else you won’t achieve your goals.”

Wright first attended classes at UC in 2010, shortly after her parents died. She had spent the years before caring for them at home, just another personal challenge she faced. In 2000, Wright said, she underwent surgery for breast cancer. Eleven years later she is cancer-free. 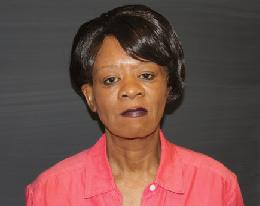 “Learning keeps me from remembering what I went through,” Wright said. “This is my survival.”

Robin Riley, assistant professor of women’s studies at SU, taught Wright in the spring 2011 semester and said Wright was especially dedicated to her class. Riley’s course, “Transnational Feminism,” was an examination of women and family relationships worldwide.

“Cynthia had so much to contribute about being an African-American woman and about not being particularly affluent,” Riley said. “She brought in such a valuable perspective for all my other students, who were mostly traditional undergraduates.”

Riley remembered Wright’s presence at an informal gathering of students, a meeting designed to help them get to know one another and ease the pressure of classes. Riley said she mentioned “Sylvester,” a soul singer popular in the early 1980s, to her students and Wright’s eyes brightened immediately. She repeated lyrics and shared memories of the artist. “I love her liveliness,” Riley said.

Wright credits that to her upbringing on the South Side. She has lived in the same house on Fernwood Avenue, off of Midland Avenue, since her parents bought it in 1964.

The South Side neighborhood used to house upper-class and middle-class residents across all races, Wright said, but now she sees a “different” neighborhood. “Now there’s fussing, cussing, drinking and fighting all over and everyone’s afraid to go outside,” she said.

The neighborhood’s deterioration led Wright to do volunteer work with Syracuse United Neighbors, she said. SUN is a grassroots activist organization that has taken a significant interest in the South Side and its residents. Phil Prehn, a community organizer for SUN, has worked alongside Wright for about 18 years.

“Cynthia analyzes issues beautifully,” Prehn said. “She’s so grounded in her neighborhood. She works amazingly hard and always seems to come out on top.”

Wright said she hopes to use her degree to work with the elderly, either in a nursing home or some kind of school — but that working again was the most important goal for her. A longtime recipient of Social Security disability aid, Wright said she remembered a lesson from her mother: “My momma always said there’s nothing like having your own.”

Wright does not consider herself a “role model,” but hopes others can find inspiration from her story. “Nothing you really want in life is easy, but you have to want it.”