When Marshella Mason arrived at Corcoran High School three years ago, the incoming band director had one mission: grow the program. Since then, the number of students enrolled in the school’s band has more than tripled — from 15 to 47.

“The arts are important anywhere regardless if it’s in the Syracuse City School District or anywhere,” Mason said. “Kids need outlets other than just academia. Not that academia is not important, but for some kids, it’s the arts that keep them there.” 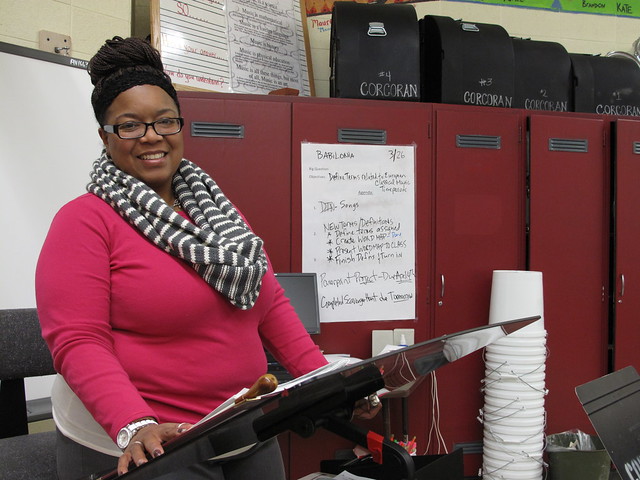 Corcoran’s musical profile is prevalent throughout Syracuse. On Feb. 8 at the Syracuse All-City Instrumental Music Festival at Henninger High School — a concert Mason helped manage — 20 Corcoran students performed as part of the high school band. The Cougars had six percussionists, three flutists, three clarinetists, two trumpeters and two alto saxophonists participate, along with one tubist, one French horn player, one tenor saxophonist and one bass clarinetist.

In 2012, the Syracuse City School District started its “Great Expectations” initiative. An objective is to “recruit, develop, support and retain effective teachers and school leaders.” Syracuse Superintendent Sharon Contreras said the All-City concert was designed to showcase not only students, but also instructors — like Mason. “You see the absolute best when they come together,” Contreras said.

Syracuse City School District Supervisor of Fine Arts Sarah Gentile started working in the district at the same time as Mason, and she said she has seen Mason’s “welcoming personality” and knack for recruiting change the Corcoran program. “She goes above and beyond for her students,” Gentile said. “She’s definitely an asset to our program.”

Mason has spent 16 years in the Syracuse City School District, 10 1/2 of them at Frazer K-8 School. A transition from middle school band to high school band demanded an increase in skill and commitment levels.

On a normal day, Mason arrives at Corcoran for a band rehearsal at 7:40 a.m. By the time her day wraps up at 2:50 p.m., she’ll have taught two band sessions, piano lessons and a course called Music in Our Lives. Each of the band rehearsal classes has about 20 students. Mason also recently started Corcoran’s first school drum line.

“It’s a mixture,” Mason said. “There’s a little bit of everyone.”

But one of the things she especially tries to do is treat everyone the same.

“Sometimes you have to have those honest conversations,” Mason said. “And they may not have anything to do with music at all that day, but it may be something that’s a life lesson.”

Justin Mertz, the assistant director of bands and director of the Syracuse University Marching Band, said, “Music is important to any school district. It’s a way of educating students that’s different from other subjects and other content areas. It’s a way of aiding students’ cognitive development, their critical thinking skills, their reasoning skills and even their artistry.”

At SU, Mertz teaches students who come from all across the globe. But after being selected by Mason to conduct the high school portion of the All-City concert, he was able to see the grassroots efforts of the city’s teachers and students.