When she emigrated from Cuba to the United States, Rosalina Fonseca hoped to stick with her career as a teacher. She had taught math for nine years in her native country and hoped to do so here.

“I didn’t know any English, but I wanted to be a math teacher in the U.S.,” she said.

She got to work — and became a student herself. A decade later, she is not only teaching math in a city school, but she also has her master’s and is advancing through the ranks partly on the strength of a state program to encourage her and others to choose Syracuse. 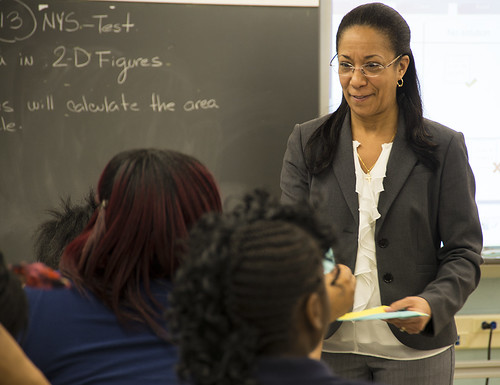 The Teachers of Tomorrow program afforded Rosalina Fonseca the opportunity to teach full-time at Clary Middle School while completing her degree at Le Moyne College. The program was established in 2000 by the New York State Department of Education to combat teacher shortages in the city school districts of New York City, Buffalo, Rochester, Syracuse and Yonkers. | Jessica Bidwell, Staff Photo

The program, she says, is “awesome,” sounding as much like the student as the teacher she is.

Teachers of Tomorrow pays more to teachers who choose Syracuse and teach in key subject areas, then helps them earn more through continuing education.

Fonseca’s path was incremental, and determined. English classes got her a teacher’s assistant position at the Delaware Academy School in 2001. Two years later, she was offered the position she sought: a job teaching math at Clary Middle School. Other than a one-year spell at Beard School during the 2007-08 academic year, she has taught at Clary ever since. Meantime, she’s earned a master’s degree to secure her professional certification, and the higher salary that goes with it.

Teachers of Tomorrow was established in 2000 by the New York State Department of Education to combat teacher shortages in the city school districts of New York City, Buffalo, Rochester, Syracuse and Yonkers. It aims to find teachers for particular schools and subject areas. Priority goes to schools that are considered underachieving based on state standards. Program coordinator David Lavelle said that other factors taken into consideration are schools in need of repair, or those that have special programs such as free and reduced lunches.

“We try to provide reimbursement to anything that will lead to the right certification,” Lavelle said.

Fonseca continued teaching full time at Clary while completing her degree, going to class part time at Le Moyne College. In 2012, she graduated and earned her professional certification.

In addition to tuition reimbursement, the program has other offers for teachers, such as recruitment incentives. The recruitment incentive provides a $3,400 stipend in addition to a first-time employee’s base salary, which in the district is $42,052. However, this still leaves teachers in Syracuse with a slightly lower salary than the average for a starting teacher in New York, which according to the state education department is $48,520. 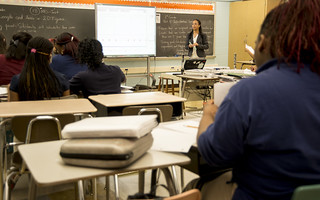 Lavelle said more than 20,000 teachers have been hired with the help of the recruitment incentive program. Ann Sanzone, assistant director of personnel for The Syracuse City School District, said it gives the district a leg up when it comes to recruiting. Of the 80 to 90 teachers the district will bring in during a given year, about 10 to 15 new teachers come in part thanks to the program.

The overall statewide program has reimbursed courses for more than 10,000 teachers over the years.

“When we talk about all of our recruitment efforts, we talk about the Teachers of Tomorrow Program,” Sanzone said. “And when we talk about retention and support, we want to make sure that they get their professional certification, and that we support them by helping them with their education.”