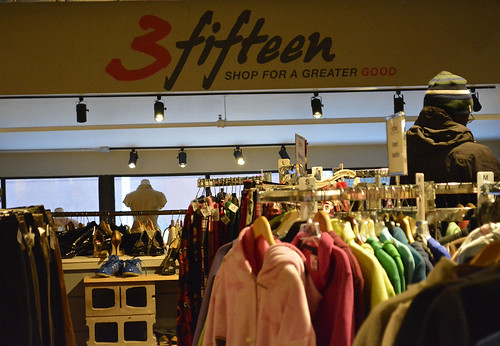 “There’s a lot of features we add to the store to make it more fun to shop,” he said, adding that customers have responded positively to the stores’ new look.

The simple, low-budget updates — a few coats of paint on the walls and the rearrangement of the sales floor over the course of a few days — are expected to improve shoppers’ experience with a relatively small investment, Chappell said.

The changes reflect the success of the department store-style model at 3fifteen, the latest thrift store whose profits benefit the Rescue Mission.

“3fifteen is the Thrifty Shoppers’ younger, trendier sister,” Chappell said. The store opened in Marshall Square Mall on the Syracuse University campus in fall 2012. Rescue Mission volunteers at the Donation Redistribution Center in Liverpool, where items left for donation are organized and divided among the Rescue Mission’s stores, choose high-quality items that are vintage or targeted toward a younger clientele for 3fifteen’s sales floor.

Since 3fifteen opened, said Brent Piech, the Rescue Mission’s sales manager, it has boasted the highest sales per square foot of any Rescue Mission thrift store.

While it doesn’t approach the sales figures of the Rescue Mission’s biggest and most profitable Thrifty Shopper locations in East Syracuse, Binghamton, Westvale and Cortland, he said, 3fifteen usually falls in the middle of the $10,000 to $20,000 range that stores individually bring in on any given week. He added that 3fifteen ranks as the smallest Rescue Mission thrift store.

“We see people from all walks of life,” said Amanda Rockwell, communications specialist for the Rescue Mission, speaking of the homeless and those who might be struggling financially — even with two jobs.

With a mixed atmosphere of thrift shop and department store, 3fifteen offers a better-than-average thrift-store experience, said Alycia Maurer, a sophomore at SU from Liverpool. She added that the price tags on the clothes are the biggest indication that 3fifteen is not a traditional department store. She prefers 3fifteen to her local Thrifty Shopper because 3fifteen caters to a younger audience, she said.

Reactions like Maurer’s lead Chappell to believe the 3fifteen model is working. “I think there’s some markets where this concept would work,” he said. “We could have 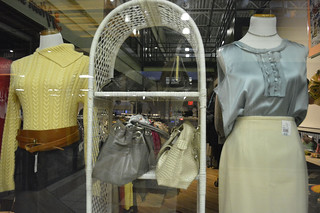 maybe one or two more 3fifteens in the next three or four years.”

Piech said he credits Chappell for many of the common elements that make 3fifteen and the major Thrifty Shopper stores successful, including organization and product distribution. Chappell has been influential in the Thrifty Shopper renovations, he said, showing store managers how to use their space more effectively. In some cases, redesigned stores display more clothing than they previously had in their warehouse-like layouts.

Displaying clothing effectively is important because stores make the most money from clothing sales, Piech said, adding, “Now two people can shop around racks and not even bump into each other.”

The thrift stores have also been improving their sorting system for donated items in the past six to 10 months, he said, which helps to boost stores’ sales by getting the right product to the right location. While volunteers at the Donation Redistribution Center do not handpick items for individual Thrifty Shopper stores to the same extent that they do for 3fifteen, he said, they do track what items sell particularly well at individual locations and then allocate similar items to that store.

“It’s been a work in progress,” he said.