Omanii’s Lemonade Heaven restaurant doesn’t just serve the best lemonade in town. It has helped resurrect the lives of a dozen South Side felons over the last 18 years by giving them a place to work.

“Before I was surviving, now I am living,” said Westcoe Williams, 54, the head chef at the restaurant. 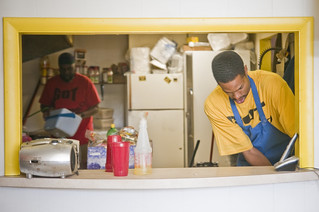 Omanii Abdullah, 62, owner and founder of the restaurant, says he has a mission to help those like Williams.

“I want to give them a second chance to prove to themselves that they can get off the streets, and stop committing crimes or selling drugs.”

The need to help is substantial: Over the last five years, local courts handling serious offenses — such as murders, sex crimes and DWIs — have sentenced hundreds of people per year, 850 to jail and around 640 to state prison annually, according to James E. Makowiec, deputy chief clerk for Onondaga County Court and for the Supreme Court in the Fifth Judicial District.

Williams is one of 12 to get such a chance from Abdullah.

“When I came out of jail in 2006 I knew I needed a job to support myself and also get my three children back,” Williams said. “So after asking around in many places, Omanii agreed to sit down with me and one of the first things he asked was if I had ever been in trouble with the law, and I said ‘yes’.”

Williams said he was kicked out of a training program at LeMoyne Manor in Liverpool — where he earned a culinary and hospitality certificate — after he’d spent 18 months in prison. He was sent back to Jamesville Prison for three more weeks, and he headed to the South Side to live and work when he got out.

It was a struggle. His parole officer was pushing him to find work.

“I’m not prejudiced but I went and talked to more than 20 people for a job and as soon as I told them I was a felon, but that I did my time, they rejected me,” he said.

“This job saved my life,” Williams said. “That day that I came in to meet with Omanii, he told me he would give me two days to see what I had and (I) came back here to the kitchen and started cooking. And the third day I got a phone call and came to meet him and he handed me an envelope with a bonus.

“After being rejected so many times at different places because I was an ex-felon, to find a man that saw something in me, and wanted to help, was such a feeling of relief that changed me,” Williams said. 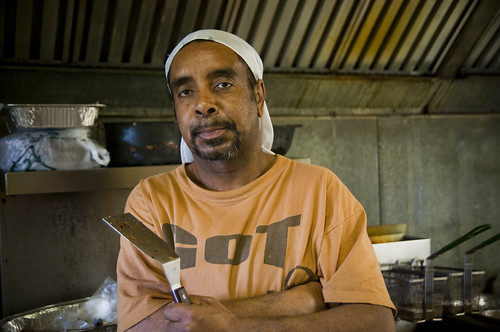 Williams was imprisoned for selling drugs and charged with criminal possession of a controlled sub- stance with intent to sell.

He was on parole for five years.

Williams’ wife, Yolanda Williams, 50, met Williams at the LeMoyne Manor training program and remembers when he came home with the news of his new job.

“He came in and told me he had found a job and I felt so happy,” she said. “Right away, I was thinking to myself, ‘Oh, now we can slowly get this, we can buy that’,” Yolanda said.

Yolanda is unemployed, and Williams’ paycheck is their only income. Although Yolanda does not know Abdullah personally, she’s seen the results of his employment policy.

“Mr. Omanii gave my husband a second chance to get his life together, and he now has more self-esteem and is more confident in himself, “ she said. “Omanii gives guys a second chance, something that not many people are willing to give because they see a felon first, before a person.”

Abdullah started Omanii’s Lemonade Heaven 18 years ago by putting a hot dog stand on the corner of South Crouse and East Fayette streets. “People who bought hot dogs every day would tell me that I should open up a restaurant, and I told them I would when I retired,” Abdullah said. There are two hot dog stand locations in the city; the restaurant is on South Avenue.

Williams said he had to learn to adapt to cooking at a fast pace because the restaurant is busy seven days a week. He learned all the recipes and picked up his speed from Leon Bellamy, 29, the manager of the restaurant and Abdullah’s godson. “Leon taught me and guided me the way he learned when he was younger and now I am probably a little faster than he is in the kitchen,” Williams said, smiling.

The kitchen is no bigger than a standard living room and has one stove, a sink, a refrigerator, and shelves holding spices and hot dog bread.

Most days, Bellamy — who has been involved with the restaurant since he was 10 — has to go grocery shopping to restock, leaving the work in the hands of Williams and others.

“I’m in charge of everything and I am never at one location because food might finish at one place and so
I have to run to stock them up or go grocery shopping because food and products run out,” he said.

“Having Williams in the kitchen at the restaurant is great because I don’t have to do all the cooking by myself, and he has adapted and learned very quickly,” Bellamy said.

In the kitchen, Williams stirs the cheese for the chili cheese fries in a pot and has a smile on his face when he says that this job has helped him reclaim his life. 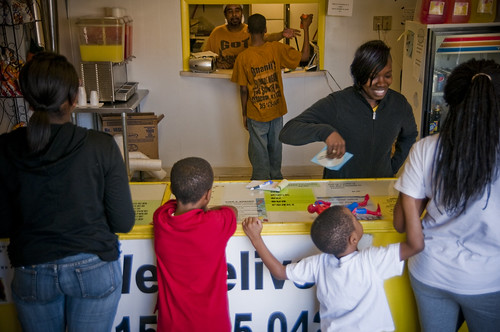 Waitress April Laftin assists patron Monique Orr and her sons Terrance and Tylique. The restaurant is family friendly with most customers returning often during the week. | Photo by Hannah L Cordell