Though there is plenty of opportunity on the South Side, businesses struggle to get loans

A generation ago, South Salina Street bustled with business, serving as the city’s main corridor for commerce.

But these days, local business owners and small business advocates say that decades of neglect from the city and a lack of structured programs has made it difficult for people to know how to start businesses — the necessary steps like finding loans and a place to set up shop are not simple. It’s turned the strip into a place where people drive through without stopping.

But advocates and business owners add that there’s plenty of economic opportunity on the South Side.

“Every day, you walk by a million bucks,” said Robert Herz, director of the South Side Innovation Center. “It’s a matter of stopping and realizing it’s there.” 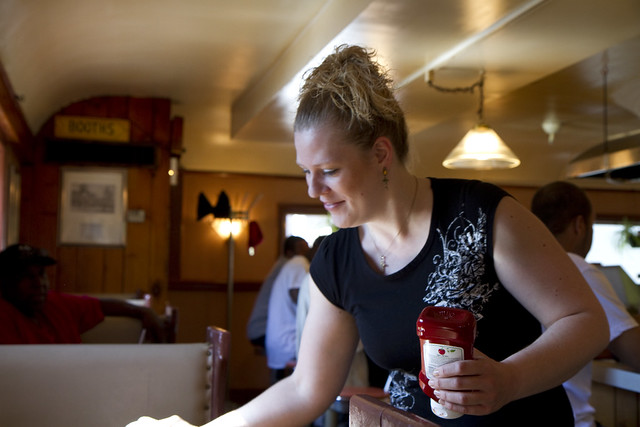 The SSIC is trying to help people find it. The non-profit is a small business incubator started by Syracuse University. The SSIC offers business training — many on the South Side lack the education to start their own companies, Herz said — and a location to set up offices.

For Quiana Seymour, the dream was never to make a million dollars. She wanted to be her own boss and to have a place where she could bring her young kids. After a career in food service, starting a diner was the logical choice, but she didn’t have any experience in running a business: balancing a budget, filing taxes, keeping stock of inventory, and, most important, finding loans.

So she enrolled in local classes, including some at the South Side Innovation Center, to learn how to start her own restaurant.

Armed with a 100-page business plan, she said she went to several banks for financing, but was rejected from all but one, which offered her $10,000 to help take over Valley Diner on Salina Street. She added that to the $20,000 she already had saved, but still came up short, so she wasn’t able to buy the building outright.

“I went everywhere” to get a loan, she said. “Nobody is lending right now for restaurants.”

She is leasing it from the people who used to run the restaurant, she said, with an option to buy in three years.

QD’s Home Cookin’ officially opened its doors this past spring. The place could still use a fresh paint job, a new roof, and new flowerbeds, she said, but investing that money when she’s only leasing the building would be a waste if she can’t buy it in three years.

How will she be able to afford that?

“Hopefully, by the time those three years are up, we can have some good economic projections and a better business plan,” Seymour said. “We can prove to the banks that we’ll make money, and then they’ll be jumping all over us.”

Seymour is not alone in her struggles. Emanuel Jenkins also started a restaurant, this one with a soul food theme, on the corner of Cannon and Brighton streets.

In an interview this past spring, Jenkins said he wants his business to thrive because it will help the blighted area of Syracuse in which it’s located.

“A lot of people are afraid of coming through here,” Jenkins said. “When it’s all just abandoned houses, I’m not surprised.”

But because of the area in which his restaurant is located, it’s been difficult for him to find loans, he said.

Jenkins, who is a caseworker for drug addicts at Crouse Hospital, needed to find some way to finance his business. He got a small loan for his business, and also took out a personal loan.

Herz, the SSIC director, disagrees with that. Banks and the city do offer programs, but they don’t do a good job of advertising them, and without a steep education in business, they’re often hard to find, Herz said.

The key to South Side business development is to get people to stop on the South Salina Street strip, Herz said. That won’t happen until businesses start popping up, which is hard to do without support from the city and from organizations, he said, but that’s all changing.