At Rest at Garland

Charles Garland always wanted to be a doctor. He dreamt of the days he could perform surgeries and save lives. But when Garland was a child, his future profession was already planned out for him. Instead of going to summer camp like the average child his age, Garland spent his summers washing hearses. 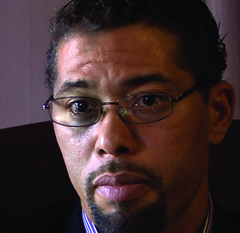 Charles Garland, manager of Garland Brothers Funeral Home, says he has come to appreciate what he does every day — and night. “One thing about working here and helping others is I know I’m needed. It’s gratifying.” -- Photo by Sierra Jiminez

“I used to get upset when I was younger,” Garland said. “But you just accept the fact that this is your calling.”

In 1936, Garland’s grandfather opened Garland Brothers Funeral Home, located just off South Salina Street on the South Side of Syracuse. The small, white building and the Garland family name have become a safe haven to the South Side community.

“I think my family just assumed it would be something I would join later on,” Garland, 45, said. “So when they asked me to join, I said no.”

Instead, 18-year-old Garland joined the United States Navy. He traveled the world. He became a father. And at the age of 24, he changed his mind.

“I called my family and told them I would help them,” he said. “This was back in 1988. I had no intention of staying.”

More than two decades later, Garland is the manager of the family-owned business. Between Garland, his cousin, and a select few hired employees, the funeral home hums almost 24/7.

The ministry never stops. The phone is always ringing. Calls from the local hospitals and nursing homes, or “death calls,” as Charles Garland refers to them, can come at any time of the day or in the wee hours of the night. When a call comes, Garland has to drop everything to pick up the body.
He pulls the company hearse around to the back of the funeral home. He opens the back door and loads a large stretcher into the vast empty body of the vehicle. It’s less than four miles to Upstate University Hospital. And Garland knows the trip well.

“I’ve got a good reputation with everybody I know,” Garland said as he signs for the body he has come to pick up. The deceased died the night before at Upstate University Hospital. Garland calmly signs to pick up a wallet, $22 in cash and a T-Mobile cell phone.

He loads the body and gets back in the car. He continues the car ride with a conversation about Syracuse sports, joking at the number of cars backed up along the hospital roads. 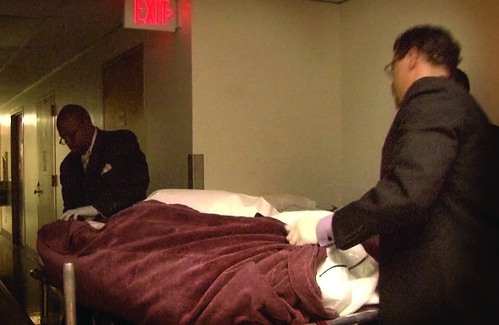 Charles Garland, right, manager of Garland Brothers Funeral Home, carefully prepares to transport a body from Upstate University Hospital. He responds to “death calls” from hospitals or nursing homes at all hours, day or night. -- Photo by Sierra Jiminez

His laughter, joking demeanor and friendliness with the hospital staff show how comfortable he is with his job. He said he has no plans to leave soon. But when he does retire, he doesn’t want his children to take over.

“I have children but I haven’t groomed them to do any of this,” Garland said about his three children. “They have to make up their own minds to do it.”

Out of a sense of duty, Garland has taken over and maintained the family business.

“We all want to serve a need,” he said. “One thing about working here and helping others is I know I’m needed. It’s gratifying.”

But Garland said he hasn’t always thought that way. At 24, he treated the funeral home just like any other mundane job. It wasn’t his passion, and it showed in his lack of empathy for the mourning families.

“Somewhere along the line I changed my mind and realized that this is really serious,” he said. That line was drawn more than 12 years ago after Garland dealt with the body of a 12-year-old girl who had run away from home and been murdered. Her body, Garland said, was dismembered.

“It was done by somebody I knew,” he said. “It affected everyone in the community. It was just an awful experience.”

It was then, Garland said, he made up his mind to stay in Syracuse and make the ministry of the funeral home his life.

Kelvin Cannon, an assistant at the funeral home, began working there in his mid-20s.
“It’s not easy, and it never gets easier,” Cannon said.

Now, at 43, Cannon said his approach to life has changed because of his job.

“It’s taught me to be more humble,” he said “It’s also allowed me to be blessed because God could have taken me out at any time.” 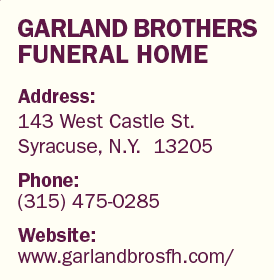 Every person they see responds differently to a loss. Some get angry, some drink, and some find peace in spirituality. But no matter who the customer is, neither Garland nor Cannon is ever at a loss for words.

“I mean what do you say?” Cannon said. “I never tell nobody I’m sorry. I give them my condolences and that’s it. We all have to die one day.”

But sometimes it’s not what they say, it’s what they do. For Paul Dewan’s family, Garland offered to help in any way he could after Dewan’s brother, Brian Carter, died of a stroke — even going so far as to provide transportation for Dewan’s mother after her son’s wake.

“We chose them because they’ve always been there for us,” Dewan said.

“When families are going through situations like this, they tend not to have all the pieces together,” he said. And Garland Brothers tends to kind of pull that together.”