May 8, 2014 Comments Off on Saving the Building

Benediction Cafe, fully accredited culinary training program to replace deteriorating church The historic 104-year-old church at 711 E. Fayette St., the former home to People’s African Methodist Episcopal Zion Church, will be renovated and turned into a cafe and culinary school. The project organizers said they hope this is a good way to serve the community and the economy, while ... END_OF_DOCUMENT_TOKEN_TO_BE_REPLACED

A Future for Food

College and city students partner to learn about sustainability, healthy living As part of a Syracuse University course that examines the relationship between cities and food, students partner with community collaborators to develop a final project that supports food systems interventions throughout Syracuse. Our group is partnering with Modern Primitive Exchange, an art and design forum, on the Wilder Compound ... END_OF_DOCUMENT_TOKEN_TO_BE_REPLACED

Our Summer Print Issue features a profile on Sam Wright, a chef with Meals on Wheels of Syracuse. Also in the issue read a special guest column by Syracuse University students completing a course in Food Studies called “Feeding the City: Urban Food Systems.” Their work aided in the efforts in a new sustainability workshop series offered this year by ... END_OF_DOCUMENT_TOKEN_TO_BE_REPLACED

He Loves to Serve

Sam Wright has cooked at Meals on Wheels for nearly three decades Sam Wright was looking for a job in 1986 when he came across a “help wanted” sign for an assistant cook — with the weekends off, too. He had his doubts about the offer, but inquired and took the job with Meals on Wheels of Syracuse. “I honestly ... END_OF_DOCUMENT_TOKEN_TO_BE_REPLACED

Laurence Thomas compares teaching to romantic love. “Teaching at its best is very much like a romance, which reaches the heights it should reach only when both sides do their part,” Thomas, a philosophy professor, said, “No one person can make a romance, and unrequited love is a deep source of pain.” END_OF_DOCUMENT_TOKEN_TO_BE_REPLACED

Marshella Mason helps enrich students’ lives through music When Marshella Mason arrived at Corcoran High School three years ago, the incoming band director had one mission: grow the program. Since then, the number of students enrolled in the school’s band has more than tripled — from 15 to 47. “The arts are important anywhere regardless if it’s in the Syracuse ... END_OF_DOCUMENT_TOKEN_TO_BE_REPLACED

Mary Nelson envisions basketball and tennis courts next to her center For weeks last winter, snow covered the empty grass lot just north of the Mary Nelson Youth Center. But that’s not what Mary Nelson sees now. What she envisions is what she hopes will be a reality in just a few months: a neatly paved lot with two basketball ... END_OF_DOCUMENT_TOKEN_TO_BE_REPLACED 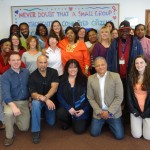 April 17, 2014 Comments Off on Members of Syracuse Grows Hope to Improve Community Gardens

Group to hold sixth annual resource drive this Saturday Syracuse Grows, a nonprofit organization dedicated to bringing “food justice” to the city’s residents, hopes to raise $10,000 this year. Some of the money will help buy supplies that would better allow it to help local gardens, some of which are on the South Side. The organization’s chair, Sarah Brown, said ... END_OF_DOCUMENT_TOKEN_TO_BE_REPLACED

April 15, 2014 Comments Off on Southside Academy Introduces Critical Thinking in a New Way

The Southside Academy Charter School found a new way to promote critical thinking in its classrooms and it’s in a way that no other school in the Syracuse City School District has tried. The charter school now offers a philosophy class to its eighth graders in the junior honors society. The class is held every Friday and is taught by ... END_OF_DOCUMENT_TOKEN_TO_BE_REPLACED