They Cover It All

As many of you may already know, I play in a band. For those of you who don’t, the name of my band is the Soft Spoken Band, or SSB.

The SSB has been in existence without pause since 1984. Being around for almost 30 years, we’ve seen a few changes. As with most bands, our changes have occurred mostly with membership, music styles and performance venues.

A few years ago, the SSB was performing with a much different membership than the current lineup. The style of music we performed was anything that middle-class America thought was cool. It included everything from country and rock ’n’ roll to the hippest rhythm and blues.

Bands that performed with that type of style and versatility fit in perfectly with the cruise industry, which is where we found
ourselves working. 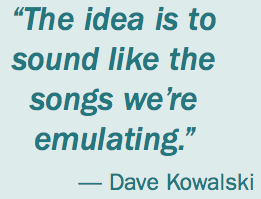 It was a normal day for an American musician performing on a cruise ship. (The reason I emphasize “American” musician deserves another whole column, so I won’t get into it here.) We performed on the SS Oceanic, which featured a Disney theme. The band didn’t fit into the ship’s daytime itinerary, so oftentimes we’d go hang out at the private beaches, which were owned by the cruise line. We had fun.

On this particular day, we decided to go for a ride on a banana boat. A banana boat is really a tube shaped like a banana that is pulled by a speedboat. Not thinking that day about the fact that I could not — and still cannot — swim, what did I do? I jumped on the boat. And yes, you figured it, the boat turned over, and we all spilled into the water. This was not just any water, mind you. This water was the deep Atlantic Ocean, and I couldn’t swim.

Corky Ellison was also on the boat at the time. He was the band’s drummer. Thank God for his excellent swimming skills and his need to see the bandleader stay alive in order to pick up our cash from the cruise lines. Corky swam over and grabbed me across my chest and under my arm and swam me safely to the speedboat. Throughout the whole ordeal, I didn’t panic because I, too, knew that the cruise line owed us some money, and I planned to collect it. LOL.

That was a long time ago, but I can always recall the date: April 19, 1995. It was the same day that a couple of cowards blew up the Alfred P. Murrah Federal Building in Oklahoma City, killing 168 people, including children in a day care center.
Today, Corky is the leader of his own band, called Starlight Band.

The band has been together for about two years. I have had the pleasure of mixing sound for them in 2012 and 2013 at the Great New York State Fair. They are really good. They remind me of the SSB back in the day because they are versatile.

But the line could be drawn there. While the SSB learned its material by picking a few parts from songs and making up the rest, this band really studies the music.

“We try to cover all the parts,” said Dave Kowalski, guitar player with the band. “The idea is to sound like the songs we’re emulating. We want the people to recognize the music.”

Corky echoes that same sentiment. “We even try to use the same sounds that they use on the records,” Corky said.
Donna Alford, of the Donna Alford JaSSBand, recognized that, too. She was blown away by how Dave played the solo part to “Beat it” by Michael Jackson. “He played the crap out of it,” she said.

“We are a cover band,” Corky said.

The focus of the band is to play, have some fun and maybe make a little money while doing it. Starlight Band can be seen locally at the Beginnings II and Carnegie Café.