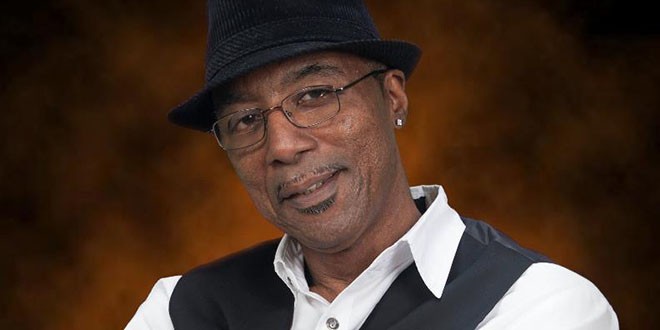 It is said sometimes that the heart is where love resides, but sometimes I think it could be the other way around. “Love is where the heart resides.” I say that because when one heartbeat stopped — the heartbeat of my good friend and musical brother Jeffrey Houston — love continued on.

The love was present at 11 a.m. on April 13 for his homegoing services at Bethany Baptist Church. The love he held for his children, family, friends and those countless others who were encouraged by him as he smiled his way through his struggles with lung cancer and life. It was there. The love of his life was there also. That was the love he had for his guitar, his music and fellow musicians and fans. That love was all there in abundance. That love is alive and well and looks as if it will live on forever. 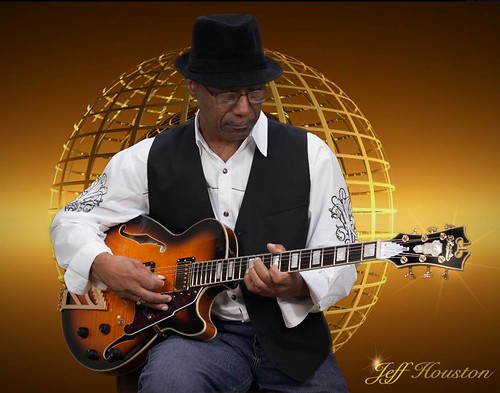 Jeff and I were very good friends. In fact, we called each other brothers. Like many brothers, we didn’t see each other every day, but we always knew that we were connected somehow.

Jeff’s heart stopped beating early in the morning of Tuesday, April 7. He was 57 years old. I had a dream on that morning. It woke me right up out of my sleep at about four-something. It was one of those dreams that seemed real. I dreamed I had been on a shuttle bus. There were a bunch of people on the bus, and we were all on our way to catch a train. I couldn’t make out the people, but I knew that they all seemed happy.

The bus had an accident and some of the people didn’t survive. I didn’t know who had perished, but I knew that there was a train to catch and we had a certain time to be there. So I began to run, and I never looked back. In the dream, it felt as though someone I loved dearly was running right beside me. I thought maybe it was my wife. I had a feeling that she was going to make it there but not me. I was losing my breath and gasping for air but I knew I had to keep on running because I didn’t want to be separated from her.

It seemed like it took an eternity to get to the train, but at the same time, it felt like we got there in an instant. The train was moving extremely fast and it never stopped. It looked like a streak of light. The train didn’t travel on rails, and it had no beginning and there was no end. I felt enveloped by love as it swooped by me. In that moment, I knew that my loved one had made it onto the train without me. And even though I didn’t want to be separated, I felt OK with it.

That’s the point when I woke up. I just lay there for a few minutes thinking about the dream.

“What was that all about?” My wife, thank God, was still there with me sleeping by my side. But I still felt a little weird.

A little while later, I got a call from Jeff’s brother, Mike. By then it was a little bit after 5 a.m. At that time of morning, I felt that his phone call wouldn’t be good. He uttered the words that I dreaded to hear. “Jeff passed. It happened at about 4:15 or 4:20 this morning.”

I rushed up to the hospital. When I got there, Jeff was in bed. He looked as if he’d just been running a race and had been losing his breath. At the same time, he looked peaceful. As if he’d won the race. As if he’d been victorious.

I stayed for just a minute and embraced Mike and the family as I went away thinking about what I had just witnessed. God had revealed to me my brother’s passing, and I know now what our connection was. It was spiritual.

When Jeff was diagnosed with Stage IV Lung Cancer a couple of years ago, I was one of the first people he told. “Don’t worry about it,” I remember him saying. “God’s got this.” He was telling me then that he knew how to deal with it. And I saw how he dealt with it. He just kept right on living and giving thanks for each passing day and looking ahead towards the next. Jeff didn’t bother wasting precious time wallowing in self-pity, at least not publicly.
A country singer named Tim McGraw wrote a song called, “Live Like You Were Dying.” The song talks about forgiving, doing new things and living life to the fullest in the face of dire news. Jeff’s last few years were the epitome of that song’s lyrics.

Jeff kept it moving. The doctors said they had an experimental treatment, so he let them do what they thought they could, and he did what he could.
He found a new love and became engaged, and he worked on his music and completed a song called, “Reminisce.” He took tons of pictures and attended family functions. He danced at benefit concerts, played gigs and drove his mother to the grocery store. Basically, Jeff plugged his life into his guitar amp and turned it up on 10. He also expressed his feelings a lot. “I love you Bruh. I love you, too.” Those would always be our parting words.

In one of our very last conversations, when he was in his hospital bed slowly transitioning from Earth to glory, he said to me, “Reg, some things you’ve got to learn to live with.” I had been trying to comfort him by keeping things conversational, so I had just been telling him about my constant battle with my weight.

Those were not his last words to me, though, because I did see him again. But his advice from his deathbed is what I hope to always remember. You see, he knew he had cancer, so he learned to live with it. What he didn’t do was live on it.

He lived with it until his heart stopped that fateful morning. But until then, he never stopped looking ahead. In fact, just five or six days before he passed, he was talking to me about getting his car fixed and helping to organize JAMS. That’s an organization of musicians and artists that he and I, along with some others, formed a few years ago.

I think in the past couple of years of Jeff’s life, he was able to demonstrate through his words and actions the type of person he was and his purpose in life. Jeff’s purpose was to bring us this message.

I believe Jeff would want us all to learn something from it. “Some things you got to learn to live with.”

So let us examine ourselves. Let’s look at what’s important in life and live for it. And as for the rest of it, we just have to let do what it do!