I ran into Pat Odom about a month or so ago in the supermarket. Pat was my daughter Maricia Danielle’s chaperone back in 2003 when she won first place in the local ACT-SO competition in the vocal music category. The win allowed her to travel to a national competition in Miami.

Pat told me that she was still very much involved with ACT-SO and invited me to attend their upcoming banquet. ACT-SO is an acronym for Afro-Academic, Cultural and Technological & Scientific Olympics. It is sponsored by the National Association for the Advancement of Colored People, better known as the NAACP.

The ACT-SO program recruits African-American and Hispanic high school students to encourage and reward excellence in the areas of humanities, science and business and visual and performing arts. Those disciplines are further broken down into 26 sub-categories, some of which are biology/microbiology, mathematics, dance, original essay and filmmaking.

Annually, the local ACT-SO program holds competitions in the categories in which they have students enrolled. The students receive coaching and are judged by professionals who are adept in the respective disciplines. This year’s competition yielded a host of winners. The winners were selected according to the scores they received from the judges. The system doesn’t always provide for a first-, second- or third-place winner. But the ACT-SO mantra is that “All are winners.”

The winners are awarded their medals and certificates at a banquet held in their honor. This year’s banquet was held April 14 in Cicero at the American Legion Hall, Post 787 on Legionnaire Drive.

Dr. Dick Ford, founder and director of Signature Syracuse, provided musical entertainment. Ford’s program provides weekly lessons to scores of youngsters within the city of Syracuse. Many would not be able to afford private lessons be it not for a program like his. The ensemble he presented consisted of high school and college students from his program. 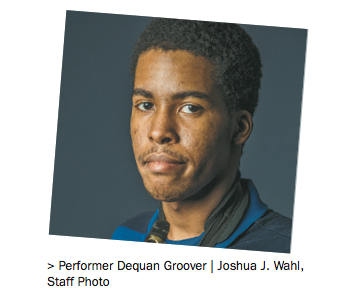 One of the Signature Syracuse’s performers commanded my attention. His name is Dequan Groover. Dequan, 21, is a former Henninger High School student who now studies music at Onondaga Community College. He also takes weekly lessons at Signature Syracuse. Dequan played the tenor sax for the evening’s performance.

“I’ve been playing the alto and tenor sax for about two and a half years, but I started out on the drums about seven years ago,” he said.

Ford described Dequan’s musical talents. “Dequan is a very sensitive player. He’s very expressive on the drums, and he listens. Sensitivity with expression and good listening skills are a commodity for drummers.”

He added: “Dequan is a natural musician.”

Dequan impressed me in our conversation with his answer to one of my questions: “What does he like most about music?”

Dequan spoke his answer with confidence and sincerity. “I like the way it touches people. People can come together around music. I like being a part of that joy.”

I also spoke with two of the ACT-SO winners, Kierrah Titus and Justin Tanksley.

Kierrah is a 17-year-old Cicero-North Syracuse High School student with a very promising voice. She has traveled with her family to New Jersey on two occasions to compete for a spot on the popular television show, “The Voice.” Following the award banquet, she was planning to travel to Long Island to audition for the “X Factor.” 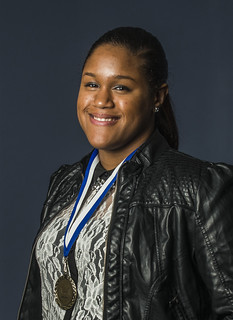 Kierrah was very well-mannered and a bit subdued during our interview, so I asked her if she is shy about singing.

“I am a little,” she said. However, a little while later her mother, Latrice Titus, asked if she would sing the song that earned her first place in the competition. She immediately jumped up and started to bellow out “Halo” by her favorite singer, Beyonce.

There was no hesitation in her actions at all. She got up like a pro and sang it with precision and style. Her pitch was great, and her control and range were really good.

She plans to go to college after graduation in June.

“I was accepted at SUNY Cortland,” she said. So I mentioned to her that the director of the SUNY Cortland Gospel Choir and I played in a band together and that I would tell him about her.

Justin Tanksley — home schooled and sharp as a pin — likes to sing and writes songs and poetry. He takes vocal lessons from Ronnie Leigh, who has been performing in the Syracuse area for a number of years and is one of my mentors. Justin took home an honorable mention in ACT-SO’s vocal music category. 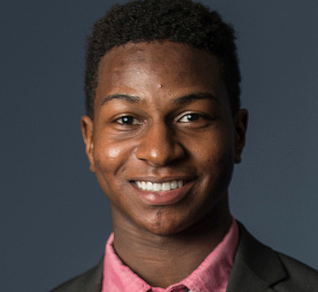 “I have to be emotionally invested in a song before I can sing it,” he said. “I sang the song ‘Someday We’ll All be Free’ by Donnie Hathaway when I auditioned for ‘The Voice.’ I made the top 200,” he said. Justin also plays the drums.

The banquet’s mistress of ceremonies, Tiffany Henderson, had some words of encouragement for all the ACT-SO contestants. Tiffany started with Ford and eventually went on to compete in 2003 in ACT-SO’s local vocal music category.

“I didn’t have a lot of belief in myself, so I never felt like I could win,” she said. “I didn’t get the first-place medal but the person who actually did made me feel like if she could do it, so could I. She was very talented but she always encouraged me. She helped me to know that I was a winner, too.

“This year, I am standing before you as the keynote speaker. We are all winners.”