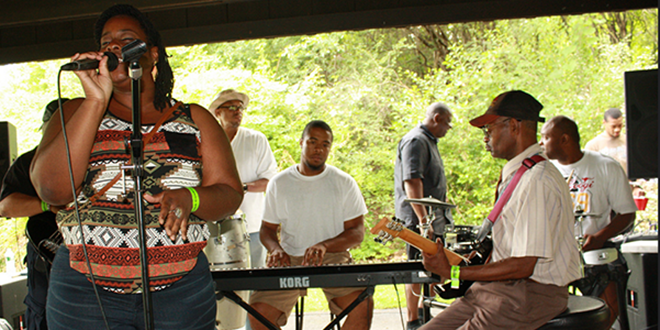 JAMS is a loosely knit organization consisting mainly of musicians, whose members have come together for a common good — promoting and encouraging one another. Their intent is to keep the fire burning, mainly in the area of live music, but in other art forms as well.

Donna Alford of the Donna Alford JaSSBand came up with the idea of having the cookout and inviting musicians she knew for a “potluck” dinner at the park.

“I wanted all the musicians to get together and just have fun,” she said. 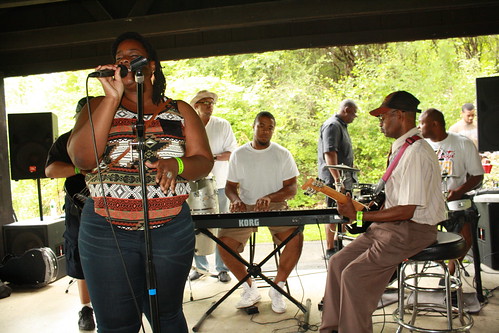 The cookout turned out to be a success and the food plentiful. The musicians and their families brought in desserts, ice and extra beverages, while Kevin and Desiree Henry and their family prepared the main course of assorted barbequed meats with all the fixings.

The scene was also crawling, as you might suspect, with musicians. There were guitarists, bassists, percussionists and harpists — if there was an instrument that you could name, someone was there who could play it.

Ben Terry sensed that there would be a lot of musicians. He knew they would all be itching to jam, too, so he came up with an idea so everyone could perform. 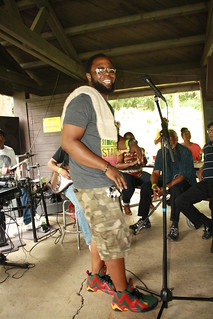 The idea was to host a series of what he called “Raffle Jams Sessions.” The way it worked was: All the musicians who wanted to play had to put their names into a jar upon arrival. The jars were labeled by instruments, such as bass, drums and keyboards.

Later on, Ben pulled names from the jars as he needed musicians to fill certain positions on the bandstand. If a piano player were needed, he’d go to the piano jar. The person whose name was pulled would play during that session.

It was a brilliant idea.

“I really liked the raffle jams sessions because it gave me the chance to play with some cats that I hadn’t played with before,” said Terrance Robinson of the Jah Eyes and the Survivors.

The audience enjoyed it, too. People arranged their chairs and loungers along the tree line and grooved in the scene. Some even brought cards and board games to add to the fun.

JAMS didn’t forget the children, either. Paul Lee of Soul Smooth and his mate, Sara Evans, provided a strolling magician.

This was truly an event for the whole family. Next year, we hope to double the attendance.